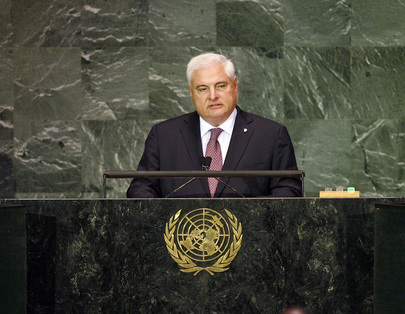 RICARDO MARTINELLI BERROCAL, President of Panama, began by focusing on climate change and, while he congratulated all nations for their solidarity in confronting global warming, he nevertheless called for decisive action and a new approach to tackle a crisis that had been triggered by unchecked exploitation of natural resources.  “We must apply new formulas, change our behaviours and value our relationship with nature,” he said, adding, “our options are clear […] if we do not act with prudence, the consequences will be irreversible.”

Continuing, he highlighted the role Panama played on the international scene, saying his country had a duty to “demonstrate how our economic model and government can be exemplary to all”.  Speaking as a former entrepreneur, he said he had entered the political arena to change things and he planned to put his private sector experience to work as he implemented the broad mandate given to him by the people of Panama.

Although his tenure began this past May in the shadow of the current economic and financial crisis, he noted that Panama was growing.  He pointed to significant improvements within the country thus far, including increases in the salaries of law enforcement officials, distribution of $100 per month to senior citizens without retirement funds, low-cost housing, and construction of a metro, which would be the largest employment programme in the history of Panama.

Turning to the banking and financial sector, he highlighted the importance of Panama, with its groundbreaking shipping Canal that joined the Caribbean Sea to the Pacific ocean, was a “gatekeeper of the global economy.”  He added that the ColÓn Free Trade Zone was the largest in the hemisphere, which made the country the most important maritime commercial route in the world.  Thus, Panama was “the most efficient logistics hub in America”.

Important to that logistics hub were plans for a third set of locks that aimed to expand the capacity of the Canal and further open the doorway for international commerce.  “ Panama is an ideal place to invest, to establish enterprises and to live.  We will transform Panama into the Hong Kong or the Dubai of America.”  He highlighted the benefits of the Panama-Pacifico Special Economic Area, which made labour and immigration welcoming and flexible.

He exclaimed, “All are welcome to Panama.  We are open for business!”  He also said that tourism was the country’s new passion, and that its national parks, coral reefs, islands and biodiversity made it an ideal travel spot.

Turning to issues within the Americas, he said he was closely following the reconciliation efforts in Honduras.  He noted that Honduras’ return to the rule of law was necessary to its well-being and that of Central America.

He noted that because Panama was a geographical crossroads, it was used by organized crime for drug and arms traffic, but that “we are declaring our own war”, and said that they had committed to becoming active partners with Mexico and Colombia in the battle on narco-terrorism.  He ended on a positive note:  “If I had to describe Panama in just a few words, I would say we are a country and a people full of surprises.  Panama will amaze you.”