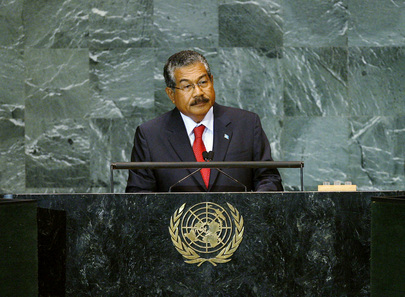 JOHNSON TORIBIONG, President of Palau, said his country, a new and young Member of the United Nations, remembered and honoured the legacy of the Organization.  He went on to list a number of challenges facing the international community, including climate change, environmental degradation and the global financial crisis.  “We are now confronted with several looming threats to our continued peaceful way of life, and indeed, to our very existence,” he said.
With regard to climate change, he applauded the commitments made by members of the Assembly and outlined a joint regional policy –- “Green Energy Micronesia” -- adopted by Palau and its neighbours in the Federated States of Micronesia and the Marshall Islands, that sought to make renewable energy a pillar in the area’s collective energy security.  Palau had also signed the statute of the International Renewable Energy Agency (IRENA) and expressed hope that the upcoming United Nations Framework Convention on Climate Change (UNFCCC) in Copenhagen would yield results.
He lauded the vision and commitment in this area shown by Yukio Hatoyama, Prime Minister of Japan, and said that was just one reason Palau supported Japan obtaining a permanent seat on the Security Council.  He also noted that Palau and the Pacific small island developing States had initiated resolution 63/281 “Climate Change and Its Possible Security Implications” and he looked forward to the Security Council’s action on the issue.
On the subject of the environment, he said that the people of Palau had always lived in symbiosis with the sea.  “We are seeing now, though, that the sea, which has long been the source of our sustenance, is both rising in rage to destroy us, and becoming barren,” he said.  “This fury was caused by the abuses of humankind and we, therefore, need to take every action necessary to allow the oceans to heal themselves,” he added, and called for an international moratorium on deep-sea bottom trawling, which contributed to the rapid loss of coral reefs, a critical ecosystem.
He also advocated an end to the destructive practice of “shark-finning” to save sharks from extinction; Palau, for its part, would become the first national shark sanctuary in the world.  With that move, Palau would end all commercial shark fishing in its waters and provide a sanctuary of some 237,000 square miles of ocean to live and reproduce unmolested.  Finally, he decried overexploitation of tuna stocks and called for the establishment of the Organization of Tuna Exporting Countries to give island States fair value for the threatened resource and to make tuna fishing sustainable.
As for the economic crisis, he expressed gratitude for the development grants his country had received from allies and partners.  But he implored those States to help create international partnerships to advance the economy of Palau so his country could move away from taking handouts.  In conclusion, he said:  “We have heard the voices of world leaders from countries large and small, powerful and vulnerable.  We have heard the voice of science.  Let us heed these voices, fulfil our obligations to our people, and work for a strong economy and a healthy planet.”