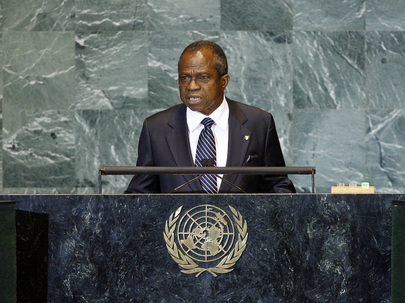 OJO MADUEKWE, Minister for Foreign Affairs of Nigeria, said that last year he had been hopeful that the world would end the devastating impact of the various global crises, including in energy, agriculture and the financial sector.  However, the world had not seen relief yet.  “There is no doubt that the international community needs, more than ever before, to fulfil its commitments to the developing world if more than half of humanity is to avoid an imminent calamity.”  He acknowledged the efforts of the United Nations, especially regarding the Conference on the World Financial and Economic Conference last June, and called for implementation of that meeting’s recommendations.
In addition to addressing the financial crisis, he noted that there was a need to boost food security.  That would require collaboration between investors, organizations and Governments.  He called for a removal of agricultural subsidies that developed countries continued to give their farmers, which continued to defy the logic of the free market economy.  He expressed concern that the substantial gains made to lift others out of poverty would reverse, and mentioned that the actualization of targets for the Millennium Development Goals could remain an illusion for many.  “Donors and recipient countries alike should make more effort to fulfil their commitments,” he said.
He reaffirmed Africa’s commitment to eliminate malaria, and mentioned that African countries were expected to devote 15 per cent of their public expenditure to the health sector.  Although considerable efforts had been made, the goal of ending malaria had not been realized, he said, adding that Nigeria intended to host a summit on Roll Back Malaria in 2011.
Touching on other issues, he urged all Member States to rededicate themselves to reversing the worst effects of climate change, adding that Africa hosted 15 of the 20 countries most vulnerable to it.  Moving on to issues of nuclear disarmament, he was heartened by the rapprochement between the United States and the Russian Federation, saying:  “The idea of a nuclear free world, the architecture of which is now being put together, has great appeal for many of us.  Such an outcome, probably achievable in our lifetime, would not only result in a safer world, but would free resources for use in sectors that would better benefit humanity.”
He also applauded the African Nuclear-Weapon-Free-Zone, which banned testing, manufacturing, stockpiling, and possessing nuclear weapons in Africa.  However dangerous nuclear weapons were, it was important not to forget the real dangers posed by small arms and light weapons, which were linked to drug trafficking, piracy and oil smuggling in the Niger Delta.  He called for the international community to prevent, combat and eradicate the trade of those weapons.
Turning to internal matters, he said Nigeria continued to make great strides in its effort to build a democratic, stable, peaceful nation.  The country sought to build on this foundation to grow an economy that would see it take its rightful place among the world’s powerhouses, he declared, but acknowledged that there were still challenges.  Still, there had been progress in the Niger Delta, and the return of peace there would provide the platform for meeting the aspirations of the people and return of economic activity.