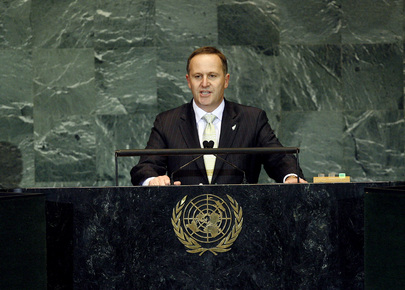 JOHN KEY, Prime Minister of New Zealand, welcomed the actions of the G-20 over the past year, but in commending those efforts, he also called on the G-20 to heed the voice of the world’s smaller economies and to ensure they had a role in global decision-making.  Free and fair trade would be the principle engine for driving developing countries out of poverty and bringing prosperity to all.
An essential component in the international community’s response to the global economic crisis must be a balanced and ambitious conclusion to the Doha Round of World Trade Organization talks, he said.  A genuinely global agreement that reduced tariffs, eliminated export subsidies, reduced domestic subsidies and increased market access would see benefits flow to all States.  At a time when all countries suffered from the brunt of the current economic crisis, further delay was, he said, “inexcusable”.
As one of the world’s “truly open economies”, New Zealand had an unwavering commitment to trade liberalization and the pursuit of bilateral, regional and global free-trade agreements.  He supported the Secretary-General’s call for the immediate suspension of price controls and other agricultural trade restrictions to reduce soaring food prices, as that would help millions cope with the highest food prices in thirty years.  He therefore called on those States and groups which had broken their promises and reintroduced protectionist measures to reconsider.  Such actions were as harmful as they were unacceptable, he said.
As poverty escalated as a result of the economic crisis, aid effectiveness was just as important as “the quantum of aid”.  This was why, last month, New Zealand had committed to the Cairns Compact, which would strengthen development coordination in the Pacific islands.  The world could not afford to contemplate failure at the Copenhagen Climate Conference, and all countries must take action that reflected their individual circumstances, responsibilities and capabilities.
For its part, New Zealand had set a target of reducing greenhouse gas emissions by between 10 and 20 per cent below 1990 levels by 2030 -- if there was a comprehensive global agreement.  He said there had been a per capita drop of 35 to 42 per cent since 1990.  New Zealand was acutely aware that most of its greenhouse gas came from livestock methane emissions, which so far no technology could reduce.
Its challenge was to find a way to balance growth in agriculture production with the need to reduce emissions and reach climate change targets.  Agricultural emissions made up 14 per cent of all emissions worldwide, he noted, adding that, as food demand rose, so would these emissions.  So far the only known way to reduce those emissions was through reduction in output, and that was not an acceptable response -- “not for New Zealand, and not for a growing world that seeks freedom from hunger”.  Instead, New Zealand had developed a proposal for a global alliance on the reduction of agricultural emissions to promote agricultural research.
Calling attention to the need for nuclear disarmament and non-proliferation, he said that last week New Zealand had presided over the General Conference of IAEA in Vienna.  That agency’s work was a fundamental pillar in preventing the spread of nuclear weapons through safeguards under the Nuclear Non-Proliferation Treaty.  New Zealand would also work for a “robust, action-oriented” outcome at the second Review Conference of the anti-personnel landmine convention later this year.  He also expressed strong support for the International Criminal Court, and said his country’s commitment to create and maintain peace and security was evident in its candidature for the Security Council for 2015-2016.