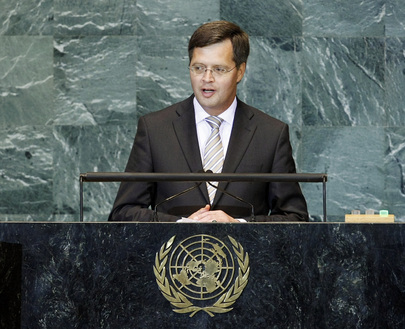 JAN PETER BALKENENDE, President of the Netherlands, opened by focusing on the "harsh reality of a financial and economic system on the brink", saying that courage and resolve were needed more than ever, especially because the crisis had been so severe and so rapid.

He stressed that it was necessary to place shared interests above narrow self-interest, to adapt existing global governance structures to the new reality, and to make decisive choices that considered all interests, especially the world's weakest and poorest people. Vital to that process was a strong, decisive and efficient United Nations, one that would deliver stability, solidarity and sustainability. The last few days at the General Assembly and the Group of 20 (G-20) meeting in Pittsburgh had shown that there was a clear realization that the world had changed. "Our interdependency gives us a shared responsibility. We can now see that the problems we face are too big for any single nation," he added.

He continued by addressing a few underlying themes: stability; solidarity; and sustainability. With regard to stability, he said that the current crisis was "clear proof that in a globalized world, instability anywhere is a threat to stability everywhere". The international policy response had shown that that was widely understood in the financial and economic context. "We cannot allow the greed of a few to endanger the jobs of many," he noted, pointing to the Pittsburgh agreement on compensation, which should end "a bonus culture that has grown out of control".

The real danger, he said, was that those who had no part in causing the crisis would suffer most deeply. In rich countries, that meant a loss of jobs and assets; in developing countries, it meant rising child mortality and rising hunger. "In poor countries it is a matter of life and death," he said, urging countries to renew their old promise to set aside 0.7 per cent of national income every year for development aid. However, development budgets were not enough; the private sector should reform, and there was a greater need for corporate social responsibility. Reform also needed to expand to global governance issues that could effectively address climate change, the food and energy crisis, and the pressing issues of peace, security, poverty and human rights.

On the issue of human rights, specifically, he mentioned a concern for the worsening human rights situation and the violent crackdown on popular protests in Iran. He was concerned about the Iranian nuclear issue, which represented a major challenge to international security, regional stability and non-proliferation. He called for a strong reaction by the international community and for total transparency by Iran, stressing that it was imperative for Iran to regain the international community's trust.

Concerning climate change, he declared the importance of reaching an ambitious, fair, concrete and comprehensive agreement, one that ensured every country contributed according to its means. Those countries that needed help in designing and implementing sound adaptation policies must receive it, which is why the Netherlands had set aside half a billion euros to promote the use of renewable energy in developing countries. In Copenhagen, the Netherlands would call for worldwide CO2 emissions to be half what they were in 1990, by 2050.

He concluded by saying the world was smaller and more complex than ever, and that solutions to the issues he had outlined began with "recognizing our mutual dependence and responsibility". That would require courage. Echoing the words of Nobel Laureate and Senator for Life Rita Levi-Montalcini, he said: "Don't fear difficult moments. The best comes from them."