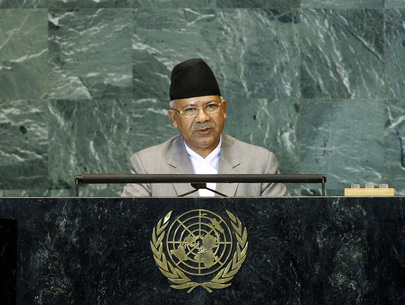 MADHAV KUMAR NEPAL, Prime Minister of Nepal, said that, as recognized in the Millennium Declaration, the United Nations was “the indispensable common house of the entire human family”.  As such, a more efficient and stronger Organization was obviously of common interest.  Sovereign equality, territorial integrity, political independence, non-interference and peaceful settlement of international disputes were the bedrock of inter-State relations.  As globalization increased the world’s interconnectedness, multilateralism offered the best means and opportunity to address the global problems of current times.

Emphasizing that Nepal was in the midst of a political transition, he said its Constituent Assembly of 601 members, who were elected through a mixed-proportional system, had been writing a new, democratic, republican constitution.  One of the most inclusive and representative bodies in Nepal’s history, it was determined to build consensus among political parties and take the process to the positive conclusion envisaged in the Comprehensive Peace Accord.  It was hoped that reconfiguring the State into federal units would be a significant step towards deepening the roots of democracy.

He said his Government had four major tasks:  concluding the peace process; writing a new constitution through the Constituent Assembly; gearing up economic development; and managing the people’s rising expectations.  It was determined to reach the destination of a peaceful, prosperous and stable Nepal, keeping in mind that freedom rang hollow where there was no development, and development lost its soul if it was not accompanied by freedom.  Mindful that failure to provide peace dividends could cause unintended consequences, he requested special support from Nepal’s development partners in addressing its post-conflict development challenges.

Since the beginning of its peace process in 2006, Nepal’s human rights situation had improved significantly, he said, adding that the Government was determined to establish a truth and reconciliation commission, as well as a disappearance commission, as part of ensuring transitional justice.  It also continued to support the United Nations through its Mission in Nepal.  Convinced of the importance of peacebuilding in post-conflict countries, Nepal would contribute to the work of the Peacebuilding Commission as a new member of its Organizational Committee.

He stressed that the least developed and landlocked countries were the most vulnerable to the multiple crises facing an increasingly interconnected world.  Their special needs called for more specific and enhanced levels of international support.  Towards that goal, the outcome of the United Nations conference on the financial and economic crisis should be implemented along with the outcome of the financing for development conference, held last year in Doha.  As recognized at the G-20 summit held in London earlier this year, the least developed countries needed their own international financial rescue, especially to ensure that they did not backtrack on prior progress towards achieving the Millennium Development Goals.  In preparation for the fourth conference of least developed countries, serious consideration should be given to the implementation status of the Brussels Programme of Action, with a view to tackling all existing obstacles.  Full implementation of the Almaty Programme of Action for the Landlocked Developing countries was also needed.

He called the continued lack of progress in the global disarmament agenda “worrying” and hoped that next year’s review of the Treaty on the Non-Proliferation of Nuclear Weapons would foster the necessary momentum towards nuclear non-proliferation and disarmament.  Nepal regarded the growing menace of small arms proliferation with equal seriousness.  Regional disarmament discourse could help to lay the groundwork for general and complete disarmament.  In that context, he urged financial support for the United Nations Regional Centre for Peace and Disarmament, established in Kathmandu last year.