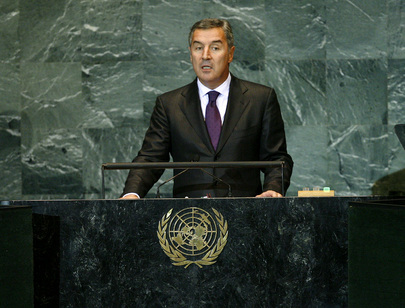 MILO ĐUKANOVIĆ, Prime Minister of Montenegro, said only concerted global efforts could yield positive results to current challenges.  Montenegro aimed to preserve peace and security by creating an environment for the implementation of the rule of law and the protection of fundamental human rights and freedoms.  Those were the main principles of its foreign policy, along with cooperation with its neighbours and regional stability.  It remained committed to the fundamental principles of the United Nations Charter.  He was encouraged by the dynamic progress Montenegro had made towards membership in the European Union and NATO.
As the recovery from the global economic crisis would be long and gradual, all countries, led by the United Nations, should be committed to policies and measures initiated through different international forums, including the United Nations Conference on the World Economic and Finance Crisis, the G-20, the World Bank and IMF.  The Government of Montenegro had adopted a package of economic policy measures meant to maintain macro-economic stability, improve productivity and preserve a favourable economic environment.
Regarding the environment, he said the harmful consequences of climate change, increasing energy consumption and the growing dependence on fossil fuels were concerning issues for everyone.  Montenegro strongly supported the negotiation process in Copenhagen on a post-2012 climate framework and calls to “seal the deal” in December.  Recognizing the importance of regional cooperation, Montenegro would organize a regional conference on climate change and sustainable development for the Mediterranean and South-West European countries in Budva on 16 and 17 October.  It also firmly advocated the fulfilment of the Millennium Development Goals and implementation of all United Nations documents related to development issues and the special needs of Africa.
The United Nations debate on the concept of the “responsibility to protect” was crucial, as the surge in internal conflicts and violations of human rights during the 1990s had led to deliberations on the primary obligation of each State to protect its citizens from genocide, ethnic cleansing and crimes against humanity.  It also had spurred a discussion on the need to protect civilians during armed conflicts.  He stressed the need to reach agreement on an appropriate instrument within the framework of the United Nations and international law, based on a consensus of all actors.
Given the turbulent characteristics of the Balkans, Montenegro paid close attention to the needs of refugees, asylum-seekers and internally displaced persons.  It was investigating ways to find enduring solutions for refugees and displaced persons from the territory of the former Yugoslavia.  On the issue of terrorism, Montenegro supported the implementation of the United Nations Global Counter-Terrorism Strategy and fulfilment of the obligations stipulated by the Convention on Transnational Organized Crime and the Convention against Drug Trafficking.  It welcomed the reform process, which would hopefully lead to a more democratic and representative United Nations.