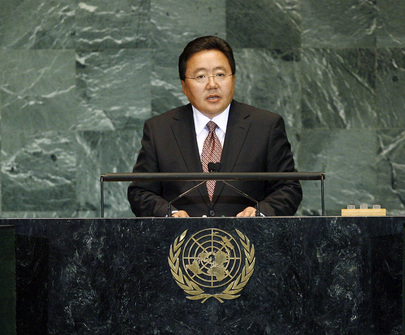 ELBEGDORJ TSAKHIA, President of Mongolia, said the human family was facing unprecedented challenges and a multitude of global crises, including economic, fuel, food, flu pandemic and climate change, which all required global solutions.  Climate change posed a “truly existential” threat to humanity.  Because global efforts should be complemented with those at the regional and subregional levels, his country had proposed a North-East Asia summit on climate change.  The subregion had already been affected by drought, desertification, land degradation, an increased occurrence of natural disasters, melting of the permafrost and reduced water resources.
He said that the multiple natures of the crises had to be taken into account in order to find responses at the global level, and all policies and actions needed to focus on human costs of overcoming the crises’ dire consequences.  Vulnerable countries, including landlocked developing countries, ought to be assisted to withstand the harsh impact of the crises.  Every sixth member of the United Nations was a landlocked developing country and was hindered by lack of access to the sea, remoteness from world markets, high transportation costs and undue delays.  The recent establishment of the international think tank for the landlocked developing countries in Ulaanbaatar would enhance coordinated efforts for the effective implementation of the Almaty Programme of Action and the Millennium Development Goals.
Marginalization and inadequate representation of the developing world in global decision-making was another drawback to the strength of a new multilateralism, he said.  There was, therefore, a need for reformed global governance structures.  The United Nations was uniquely placed to serve as the centre of the new multilateralism, because of its impartiality and universal legitimacy.  He hoped the Assembly negotiations on Security Council reform would make meaningful progress during the session on Council expansion in both permanent and non-permanent categories.  A revitalized Assembly, an increased role of the Economic and Social Council in global economic governance and enhanced United Nations capacity in democracy and peacebuilding were also needed.
He said that, as a North-East Asian nation with a recognized nuclear-weapon-free status, Mongolia supported a nuclear-weapon-free Korean peninsula.  Achieving a comprehensive solution to the nuclear issue through dialogue was of the utmost importance.  The Security Council’s summit, chaired by United States President Obama, had yesterday confirmed the path towards a world free of nuclear weapons in its historic resolution.
This year, Mongolia would observe the twentieth anniversary of its democratic transformation.  Democracy and human rights had been inherently woven into the Millennium Development Goals.  Mongolia had, therefore, been the first country to adopt, in 2005, its Goal 9 on “Strengthening human rights, fostering democratic governance and zero tolerance for corruption”.  He applauded the increased role of the United Nations in fostering democracy and good governance, with the United Nations Democracy Fund as a notable example.