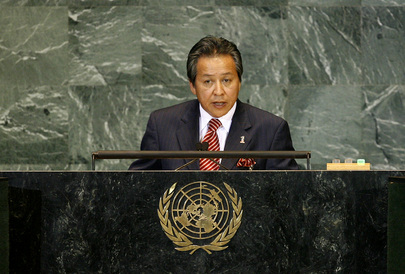 DATUK ANIFAH AMAN, Foreign Minister of Malaysia, said the developing world was not shirking its responsibilities to face the entire spectrum of challenges facing the international community, but would do so better in tandem with the developed world.  Among the most pressing challenges was climate change.  Malaysia had undertaken measures for sustainable forest management, increased use of public transportation and renewable resources.
However, developed countries must take the lead in combating climate change, and they were failing to do so.  Developed countries’ pledges for reductions in greenhouse gas emissions were insufficient.  “We have to seal the deal in Copenhagen,” he said, but there would be no deal if some were inclined to “steal the deal” through attempts to reinterpret and renegotiate key principles of the United Nations Framework Convention on Climate Change.
There was a need to balance development, food security and poverty eradication with environmental concerns.  Agriculture, the bedrock of efforts to address the ongoing food crisis, produced 14 per cent of greenhouse gases, yet more than a billion people went hungry worldwide.  Climate change must not be seen as a stand-alone subject, but as part of overall sustainable development measures.
On peacekeeping, Malaysia had been contributing to peacekeeping operations since 1960 and would continue to do so, he said.  The Palestinian issue symbolized everything that was unjust and unfair in international relations, having taken on symbolic value that coloured cultural and political relations well beyond its geographical scope.  Resolving that issue would have a major impact on peace and security in the Middle East and beyond.  Israel and Palestine must negotiate, he said, and he hoped that the United States would be an honest broker.
Non-proliferation and disarmament were also cornerstones of security, he said, and should be founded on three elements:  all nations had the right to use nuclear power; nations who had nuclear weapons must move towards disarmament; and those without must disavow acquiring them.  He also looked to the strengthening of the Nuclear Non-Proliferation Treaty and said that, as Malaysia had been doing since 1996, it would introduce a resolution on follow-up to the advisory opinion of the International Court of Justice on the legality of the threat or use of nuclear weapons.
Given Malaysia’s multi-ethnic and multi-religious population, the Government  was aware of the need to continuously promote interaction among peoples of different religions, races and beliefs and had introduced the One Malaysia concept to build on previous efforts to promote national unity.  Diversity should be seen as a source of strength.  Unity must arise from true acceptance rather than mere tolerance and be based on legal principles contained in the Constitution.
Decisions were still being made by the few for the many.  Global governance must be improved, particularly through Security Council reform including the eventual abolition of the veto and in the sphere of the economy, and while the G‑20 was more representative than the G-8, questions remained as to how truly representative and inclusive it was.  Noting that reform of the Bretton Woods institutions and strengthening the international financial regulatory system had first been proposed by Malaysia, he said that solutions were not the monopoly of the powerful.  He further proposed that while addressing ways of maximizing cooperation among G-20 members, that group must also address ways of improving links with the broader international community and finding greater clarity on the involvement of regional organizations.