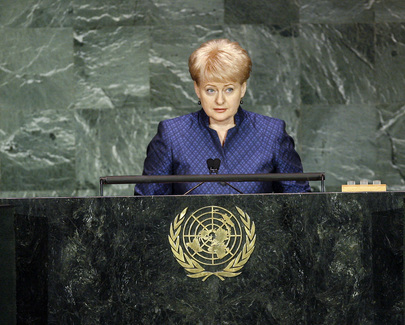 DALIA GRYBAUSKAITE, President of Lithuania, said the challenges facing the global community could not have been envisioned by the founders of the United Nations some 60 years ago. Effectively tackling the economic crisis, and addressing terrorism, proliferation of weapons and climate change required transforming the Organization into an instrument of global politics. "The modern world insists we are dependent on each other. We work with each other or we suffer in isolation," she said.

In order to address the lag in donor commitment towards the Millennium Development Goals, which was impacting the poorest and most vulnerable, she called on all nations to adapt to the global reality of common responsibilities for sustained development and listed five components to ensure continued growth, cooperation and progress. First, the United Nations peace operations were core components to peacebuilding and nation-building. Therefore, Lithuania was committed to its peacekeeping obligations, regardless of the current economic limitations.

Second, she called for a strengthening of United Nations policy against nuclear proliferation, while still encouraging civil nuclear power. To that end, the forthcoming review conference of the Treaty on the Non-Proliferation of Nuclear Weapons (NPT) next year would offer the opportunity to seek diplomatic solutions that complied with international commitments and requirements. As for her third point, she said that responsible global, regional and local governance was necessary to ensure steady and sustainable economic recovery. "Protectionism and isolationism never worked and will not work," she added.

On her fourth point, she noted that climate change required a broad and coordinated response that included inputs from all nations. Underscoring Lithuania's commitment to the success of the upcoming Copenhagen Conference, she also applauded and supported the European Union's goal to cut emissions by 20 per cent by 2020. Her final point focused on the interdependence of global and regional responsibility towards full implementation of the United Nations Charter. She urged regional organizations to take a greater responsibility in their areas of operation and to share best practices with their neighbours and other local actors.

Although Lithuania was a small nation, it was fully committed to its regional and global responsibility by utilizing the core principles of the United Nations of dialogue, respect and tolerance. To that end, she said her Government was the current President of the Council of the Baltic Sea States, as well as the President of the Community of Democracies. It would continue its preparations for the 2011 Chairmanship of the Organisation for Security and Cooperation in Europe (OSCE), Presidency of the United Nations General Assembly in 2012, as well as the Lithuanian European Union Presidency in 2013. Concluding that democracy was inseparable from peace, the rule of law, respect for individual and human rights, equal opportunities and overall prosperity, she called on Member States ".[to] recognize, from now on, in each of our capitals, that the global interest is our national interest and global responsibility is our national responsibility."