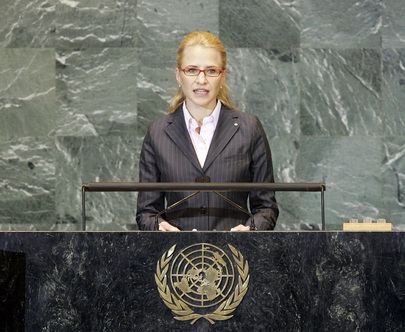 AURELIA FRICK, Minister for Foreign Affairs, Justice and Cultural Affairs of Liechtenstein, said that, today, “genuine multilateralism” was needed to address the challenges before the international community.  On disarmament and non-proliferation, the international community seemed about to enter -- finally -- a new era.  And on climate change, the United Nations was working hard to “seal the deal”.   Liechtenstein had left the meeting on climate change last Tuesday with the belief that a breakthrough was possible, because everybody understood the gravity of the situation.  Her country was approaching Copenhagen with a firm conviction that the world must listen to the voices of those who were most at risk -- to those whose survival was at stake.  A leap of faith was needed now; no half-heartened compromises, no more postponing and no more talk about concessions.   Copenhagen was not about “giving up” something -- other than self-destructive habits.

While much attention had been paid and much money had been mobilized to keep the world economy afloat, another crisis had emerged, a crisis of global governance.  There were times when concerted action by groups such as G-8 and G-20 could bring solutions for everyone closer, but one could not ignore the gap between those who were taking decisions and the rest of the world.  Effective solutions required the support of those who would implement them, and rules must apply to everyone equally.  The notion of sovereign equality was one of the core principles of the Charter and was, indeed, the main pillar of genuine multilateralism.  She was, therefore, pleased to accept an invitation from the Foreign Minister of Singapore to discuss, with other colleagues and friends, issues of global governance.  The goal was positive engagement and productive cooperation, as well as the highest possible quality in decision-making.

Turning to the reform of the United Nations, she said that in order to be truly legitimate, the Security Council must genuinely reflect the collective political will of the membership as a whole.   Liechtenstein would also specifically look for further improvements in the Council’s sanctions procedures.  As numerous judicial challenges had shown, those procedures must be brought closer to international standards of human rights and due process.

On the composition of the Council, she said that none of proposals submitted at the 2005 World Summit, let alone in a subsequent ratification process, would receive the necessary support of the Assembly.  She saw only two avenues towards expansion: Member States could wait for a massive institutional crisis to hit the Organization and then expand the Council under enormous public pressure.  Or they could work in a cooperative manner towards a solution that was a compromise and politically sustainable.  She believed that only the latter approach was in the best interest of the Organization.

Regarding the International Criminal Court, she said that, during its first years in operation, the Court had been remarkably successful, but it had also been subject to controversial political discussions.  That was not surprising, because justice could be difficult and could seem inconvenient.  However, peace, development and justice went hand in hand.  Those tasks must be fulfilled, first and foremost, by States themselves.  Therefore, efforts must be galvanized to strengthen national judiciaries, in accordance with the principle of complementarity.  The International Criminal Court would not be able to put to trial all perpetrators of the most serious crimes, but its work illustrated the world’s consensus that there must be accountability for those crimes and that impunity was no longer an option.  The 2010 review conference would give the international community an opportunity to add the crime of aggression to the list of crimes under the Court’s active jurisdiction.

The Assembly remained “the heart of genuine multilateral work”, she added.  Looking at the work programme ahead, it did not seem that it needed much “revitalization”.  There were numerous concrete challenges in front of the Assembly, to which Member States must rise.  They must look beyond their short-term domestic interests and work hard to make progress on their comprehensive agenda.