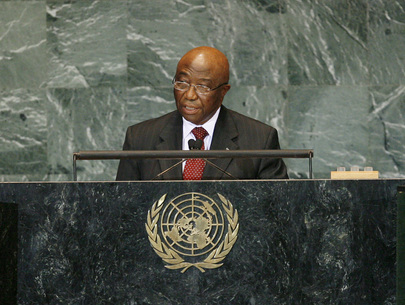 JOSEPH BOAKAI, Vice-President of Liberia, said his country continued to make progress on many fronts, including national dialogue -- with the release of the report of the Truth and Reconciliation Commission -- the related nomination of members of the Independent Human Rights Commission and the establishment of a commission to address the explosive issue of land reform.  In addition, the national disarmament, demobilization, rehabilitation and reintegration programme had been successfully concluded in conjunction with the United Nations Mission in Liberia (UNMIL).

Among other signs of progress, he noted the training of 2,000 troops for the national army, and said that the reorganized police force had also made improvements, but continued to lack infrastructure, equipment and other essentials.  Partnership consultations had recently been held to fulfil those gaps and to enhance continuity in training, though there were additional needs in border control.

He went on to describe significant strides in other areas of the rule of law, including the fight against gender-based violence.  Women’s participation in the reconstruction of the country was the subject of several programmes, and he recommended that the Secretary-General appoint a special envoy on women, peace and security, and appealed to the international community to support the Monrovia Declaration on that issue.  A policy of mandatory free primary education, with a special emphasis on girls, had also been instituted.

He said Liberia’s economic revitalization, in partnership with the international community, was shaping up as a post-conflict success story, with the poverty reduction strategy emphasizing good national leadership, technical competency, anti-corruption efforts and other reforms.  Qualifying for the Heavily Indebted Poor Countries (HIPC) process would aid further progress.

Gains in stability remained fragile, however, because of continued institutional weaknesses coupled with the absence of employment opportunities, especially for youth, he said.  Development progress was needed, in particular as a catalyst for smooth general elections in 2011.  In addition, the potential return of tens of thousands of refugees posed humanitarian challenges.  For those reasons, the fast-track relaxation of conditions placed on development assistance was needed, along with the continued empathy and support of the international community.  He expressed thanks for the extension of UNMIL in that regard and requested that it provide a security environment conducive to elections.

Maintaining that regional factors were also crucial to security, he urged attention to Guinea as well as action against illicit trafficking in drugs and humans and other transnational crime.  He also supported the lifting of sanctions on Zimbabwe and called for renewed commitments for initiatives to restore stability to Somalia, condemning the recent killings of peacekeepers there.  In addition, he expressed hope for a political solution in Darfur.  He called for urgent action to reduce greenhouse gasses and assist developing countries to respond to climate change.  He also called for a more democratic Security Council, the development of an early warning mechanism for conflicts and measures to shield post-conflict countries from economic crises.