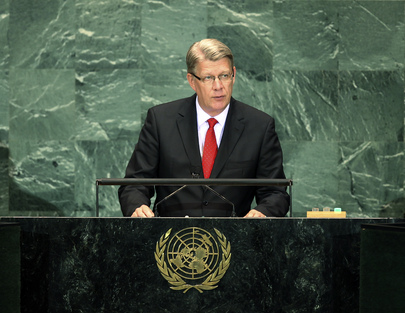 VALDIS ZATLERS, President of Latvia, said international cooperation had become ever-more important, given the wide array of challenges facing the world today.  Some of those pressing problems, namely in the areas of energy, the environment, finance, food and fuel, made global action crucial.  Over the past year, the global financial crisis had struck the world, affecting international policy.  The crisis should serve as an opportunity to promote an open global trading system, he said, expressing the hope that the Doha Development Round of World Trade Organization talks would soon come to a close.

He went on to say that developing countries had been hit severely by the global economic turbulence, yet it was crucial not to give up on attaining the Millennium Development Goals.  Although climate change was a global challenge that had to be tackled internationally, every country would have to do as much as it could to blunt the impact of that phenomenon.

Turning to global stability and security, he said it was crucial to provide both civilian and military assistance to Afghanistan and neighbouring countries, in order to impede the threat of terrorism.  Latvia had helped the war-ravaged country in both respects.  With regard to the Middle East crisis, he urged both Israel and the Palestinians to work towards carving out a two-State territory.  His country had set up a rehabilitation programme for 18 traumatized Palestinian children from the Gaza Strip.

Turning to the security situation in Georgia, he expressed regret at the closure of the United Nations Observer Mission in Georgia (UNOMIG), while urging the quest for stability to be in line with international instruments on independence, sovereignty and territorial integrity.  On the post-electoral crisis in Iran, he voiced concern about the worsening human rights situation and violent crackdowns on protesters, and urged the country to abide by relevant Security Council resolutions.

Latvia was part of the global fight against the proliferation of weapons of mass destruction and was certain that the 2010 NPT Review Conference would be a crucial step in that process.  He urged all States to cooperate with the International Criminal Court, which Latvia supported as a tool to fight impunity and to promote compliance with international law.  Furthermore, he expressed his support for the “responsibility to protect”.

Turning to the reform of the Security Council, he said such change was a crucial part of restructuring the United Nations in general.  He expressed his country’s support for intergovernmental talks on Council reform, especially as that 15-member body must reflect today’s changing world.