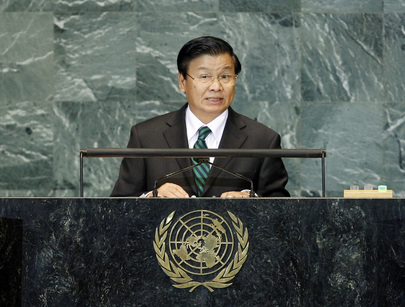 THONGLOUN SISOULITH, Deputy Prime Minister and Minister for Foreign Affairs of the Lao People’s Democratic Republic, said United Nations reform was crucial to ensure the Organization’s effective implementation of its mandate.  Reform should be comprehensive, transparent and balanced, and consistent with the United Nations Charter.  The revitalization of the Assembly, reform of the Council and strengthening of the Economic and Social Council and specialized agencies should help make the Organization truly representative of all Member States.  His country welcomed the launch of intergovernmental negotiations on Security Council reform.

Turning to disarmament, he said the impasse in the multilateral disarmament machinery undermined global peace and security.  States should adhere to their nuclear disarmament and non-proliferation obligations.  The upcoming 2010 Review Conference would be an opportunity for the States parties to the Nuclear Non-Proliferation Treaty to show strong political commitments to resolve the current stalemate in the non-proliferation disarmament agenda.

In particular, the issue of explosive remnants of war, known as cluster munitions or unexploded ordnance, created serious obstacles to development and poverty eradication efforts in more than 80 countries, he said.  Cluster munitions victims in the Lao People’s Democratic Republic accounted for more than 50 per cent of the cluster munitions victims worldwide, which had represented about 300 victims annually over the past 30 years since the war ended.  About 37 per cent of the country’s territory was contaminated with unexploded ordnance and enormous financial resources and time were needed to remove them from the area most needed for development and daily life.  Thus, his country attached great importance to the Oslo Convention on Banning and Eradicating Cluster Munitions and hoped others that had not yet signed the Convention would do so.  In order to prepare for the Convention’s future implementation, his country had offered to host the first conference of State parties after it entered into force.

He said his country was greatly dismayed by the prolonged conflict in the Middle East, which had inflicted immense suffering on millions of people, particularly the Palestinians.  He also was concerned about the decade-long economic, trade and financial embargo imposed on Cuba.  It was time to end the sanction.  On the issue of climate change, the integration of the three pillars of sustainable development ‑‑ economic development, social development and environment protection ‑‑ should be enhanced, with a view to effective implementation of the Bali action plan.  His Government supported the recommendation to launch a new global compact entailing a “Green New Deal”, which would spur investment in the green economy and lay the foundation to a shift to a low-carbon economy with greater use of renewable energy.

From the perspective of one of the world’s most vulnerable countries, he said it was important to address the unpredictability of the commodity market, to provide preferential treatment to the goods of developing countries and ensure a smooth solution to the debt issue.  The fourth United Nations Conference on the Least Developed Countries, scheduled for early 2011, was an opportunity for the international community to review its commitments to the least developed countries and identify solutions, particularly needed since the global economic crisis.