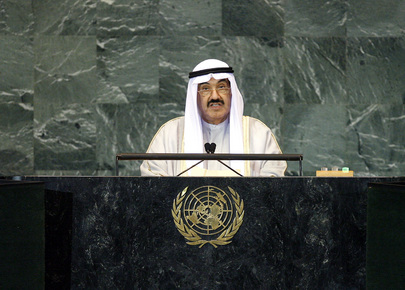 NASSER AL-MOHAMMAD AL-AHMAD AL-SABAH, Prime Minister of Kuwait, said that with the myriad of complex and diverse problems facing the global community, a strong, effective United Nations was needed now more than ever.  He encouraged Member States to uphold their responsibilities in supporting the Organization and urged the United Nations, for its part, to improve its own administrative structure and “rise to a level which would match the dangers of the times in which the world lives”, while engaging regional and specialized organizations as well.  In its own capacity, Kuwait would be participating in the upcoming Conference on Climate Change in Copenhagen, and in December would be hosting the thirtieth Summit Conference of the Cooperation Council of the Arab Gulf States, where the agenda would focus on building a framework to integrate those States, commencing with the linking of the electrical power grids between States of the Cooperation Council.  He hoped that strategic step would be the start of many others, including monetary unification.
Kuwait was proud to top the list of Arab States and hold the thirty-third position globally in the Human Development Report issued the United Nations Development Programme (UNDP), he said.  It was also proud to be in the third place globally in the field of combating illegal drugs.  At the same time, Kuwait would continue to contribute to development projects through the Kuwait Fund for Arab Economic Development, which, since its establishment in 1961, had provided some $14.5 billion in assistance in more than 100 countries.  Although a developing country, Kuwait’s contribution of 1.31 per cent of its gross national product to humanitarian development exceeded the .45% of GNP of OCED member States.  He also noted that Kuwait had hosted the first Economic Development Summit Conference for the Arab States, which focused on economic cooperation, trade exchange and the raising of living standards for Arab citizens.  In Kuwait’s parliamentary elections this year, a “quality transformation” had taken place, with four women obtaining the trust of voters, continuing the expansion of women into public service and private enterprise.
Addressing the question of Palestine, he expressed concern for the deteriorating political, economic, social and humanitarian situation in the Occupied Palestinian Territory, despite international and regional efforts and initiatives to the contrary, and condemned the Israeli military aggression on Gaza last year where homes, property and civilian infrastructure facilities had been demolished and 1,400 Palestinians, mostly children and women, were killed.  In light of the United Nations fact-finding mission documenting war crimes, he called for the Security Council to take the necessary measures needed to stop Israel’s violation of international humanitarian law.  Its own contributions and pledges for both relief aid and support for the Palestinian Authority exceeded $200 million.  Kuwait had also donated $34 million to the United Nations Relief and Works Agency for Palestine Refugees in the Near East (UNRWA) to cover the costs of urgently needed relief aid.
Speaking on Iraq, he commended all efforts to achieve peace and security, while preserving Iraq’s sovereignty, its national unity, its territorial integrity and the non-interference in its internal affairs.  He pledged Kuwait’s continuing assistance for the building of a unified and peaceful Iraq through dialogue and national reconciliation actions.  He then encouraged Iran to resolve outstanding issues regarding the occupied Emirates Islands through direct negotiations or through the International Court of Justice.
He noted with great satisfaction the recent Security Council summit focusing on nuclear disarmament and creating a world free of nuclear weapons.  To that end, he applauded the unanimous adoption of resolution 1887 (2009).  However, endeavours to make the Middle East a region free of nuclear weapons were of utmost importance and he urged Israel to join the Non-Proliferation Treaty and subject all of its facilities to the safeguards of the International Atomic Energy Agency (IAEA). While supporting the rights of all States to use nuclear energy for peaceful purposes, he encouraged negotiations between Iran and IAEA so that a peaceful solution for all involved would be realized.  He concluded with hopes that the international community would further its joint political will so that “the noble purposes and principles of the United Nations Charter” could be fulfilled.