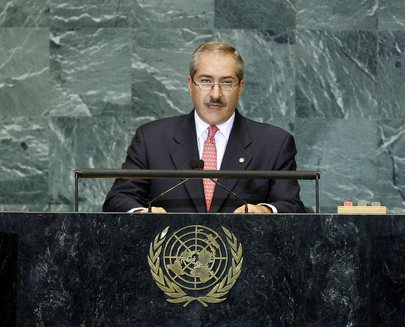 NASSER JUDEH, Minister for Foreign Affairs of Jordan, said today’s global challenges were too complex to be tackled by one country alone.  The United Nations was the best venue to address the complicated issues of the twenty-first century.  However, it, along with its subsidiary bodies, should be reformed to effectively resolve the international challenges.  The information revolution and technological advancements meant that the impact of problems, including climate change, terrorism, poverty and pandemics, were felt by all.

He noted that one of the Organization’s major achievements had been its pioneering role in eliminating colonization.  However, Israel, since 1967, had occupied territories, which prevented the Palestinian people from self-determination and the creation of their own independent State.  At their 2002 summit, the Arab world had adopted the Arab Peace Initiative, whose principles it had repeatedly reaffirmed.  The two-State solution would provide a just conclusion to the conflict.  However, Israel did not accept the Arab choice and global choice of a just and comprehensive solution.  A good-faith response by Israel was necessary.  Now, with the Administration of United States President Barack Obama, there had been unprecedented support for talks that would benefit the Arabs, Palestinians and Israelis.   Jordan was trying to advance that goal.

Jordan supported the statement made by President Obama to the General Assembly on 23 September, in which he had expressed a firm commitment to the two-State solution and a comprehensive peace.  He had also spoken of the need for a resolution of the refugee question and the illegality of Israeli settlements.  Additionally, he had had set the atmosphere for talks.  The international community should shoulder its responsibility and move to resume negotiations right away.  That constructive climate was disrupted, however, by the Israeli refusal to stop settlement activity in East Jerusalem.  The Israelis were destroying the home of the Arabs and continued to change the demographics of East Jerusalem, the heart of the occupied territories.  It was necessary to stop illegal measures and stop the settlements.  The United Nations had a direct responsibility in that process and could play a larger role in the Quartet.  The Gaza siege should be lifted -- as it was unacceptable and inhumane -- and the area should be rehabilitated.

On the issue of Iraq, Jordan supported efforts to bring peace and security throughout the country and stop all external interference in its internal affairs, so that it could recover its place in the international community and the Arab world.  He pointed out Jordan’s expanding participation in United Nations peacekeeping operations, which was indicative of the role the country was playing in the Organization.