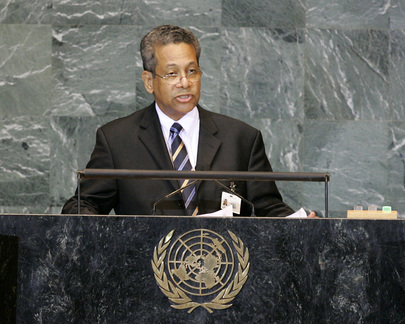 KENNETH BAUGH, Deputy Prime Minister and Minister of Foreign Affairs and Foreign Trade of Jamaica, said that, although both developed and developing countries were impacted by the multitude of crises this past year, it was the poorest and most vulnerable Member States who were least capable of responding and who were not showing signs of the recovery recently appearing in major economies.  ODA to these vulnerable economies diminished, with daunting consequences in Jamaica and CARICOM region, such as the sharp decline of investments, tourism and export demand, to name a few.  However, he pointed out that the heavily indebted lower middle-income countries were also being overlooked by virtue of their GDP per capita levels, making them ineligible for international assistance.  Jamaica was particularly concerned, as it carried a debt to GDP ratio of 125 per cent.

Turning to the G-20, he said that although the participation of developing countries was critical, accommodation of a wider cross-section of developing countries, including those small, vulnerable economies and highly indebted middle-income of the CARICOM subregion was essential to creating an integrated approach and strategy on a global platform.  He also called for the United Nations to ensure dialogue and coordinate responses, and he commended the recent United Nations Conference on the World Financial and Economic Crisis and Its Impact on Development, which had allowed developing countries not part of the G-20 to voice their concerns to the international community and contribute to solutions.  “The reform of the international financial architecture is long overdue,” he said, and urged review of the policy conditions regarding lending by IMF.

A small island developing State vulnerable to climate change threats, Jamaica was heartened by the recent Summit on Climate Change.  He favoured the conclusion of a post-Kyoto framework that would hold parties to common but differentiated responsibilities and respective capabilities, amongst them, concrete commitments on adaptation, capacity-building, technology transfers and financial assistance to developing countries.  He then discussed the crucial role of the Peacebuilding Commission and lauded the new, flexible arrangements for the Peacebuilding Fund, as a support to countries emerging from conflict.  Recognizing the role the United Nations Stabilization Mission in Haiti (MINUSTAH) had in fostering a more stable and sustainable environment for the Haitian people, he reiterated his country’s commitment to support their long-term goals and to continue to challenge the elements and security threats that threatened the rule of law and democratic governance.

Addressing the issue of reform in the United Nations, he reminded the General Assembly that the challenges facing the global community were not constrained by borders and could not be address by Member States on their own.  The need for multilateral and international collaboration was essential and he stated his firm belief that the United Nations was the only organization equipped for the complexity of the task.  However, reform was necessary to ensure the success of such work.  “Multilateralism cannot work effectively if the General Assembly, the most representative global body, is unable to assert itself as the central decision-making body of the Organization.”  He also called for the Security Council to expand its membership to reflect the wider community of the United Nations.

He concluded by stating how much he was looking forward to the erection of the permanent memorial to honour the victims of the transatlantic slave trade, an enduring symbol of the global community’s resolve to eliminate discrimination, social inequity and prejudice.  In that light, he urged the United Nations to assert itself in its unique capacity and address the challenges facing the most poor and vulnerable.  Inaction on the development agenda must be reversed and that would be in keeping with the ideals of the Charter and the shared vision of Member States for the fulfilment of the hopes, aspirations and expectations of all citizens across the globe.