H.E. Mr. Silvio Berlusconi, President of the Council of Ministers 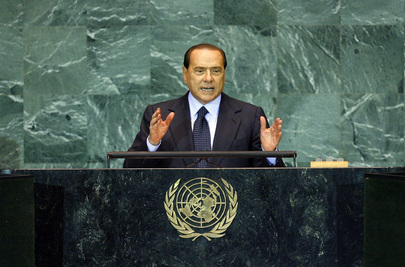 SILVIO BERLUSCONI, Prime Minister of Italy, began by reporting on the outcome of the recent G-8 Summit held in L’Aquila, which he had chaired.  That meeting had brought together 28 countries comprising 80 per cent of the world economy.  He said the participants had first decided to continue the work on banking and financial regulations that would be fleshed out during the upcoming Pittsburgh meeting of the G-20, with the goal of assuring economic growth, equity and transparency.

He highlighted the notion of a new development model -- one that would be based on open markets, rejected protectionism and allowed the poorest countries to “fully benefit from the growth opportunities afforded by international trade.”  After the L’Aquila Summit, participants had decided to revive the Doha Round of world trade negotiations, with the goal of wrapping them up by 2010, after trade ministers met in India.

With regards to climate change, the main economies had reached an agreement to limit global warming to 2° C above pre-industrial levels.  He said the “common front to combat climate change was reconfirmed” by yesterday’s Summit on Climate Change convened by the Secretary-General.  “Winning the climate change challenge will require a commitment from all the protagonists of the world economy, without exception,” he declared.

On food security, the G-8 had decided to establish a $20 billion fund for agricultural development and to fight global hunger.  He added that, on too many past occasions, the financial assistance allocated to developing countries had failed to reach the people for whom it was destined.  That was why the resources set aside at L’Aquila would be invested in concrete projects targeting primarily agricultural infrastructure in countries that promoted democracy, had good governance and respected human rights, as well as the rights of women and children.

He went on to say that stock market speculation must be countered and that manipulation of energy, commodities and food resource markets must end.  Speculating in wheat, rice and soy have led to serious crises, especially in Africa.  Further, fluctuation in oil prices caused by speculation had lead to financial and economic instability, he added.

In short, he said, the “absolute priority is that the futures market be regulated more strictly”, proposing it would be key to consider a global system of strategic commodities reserves to “nip in the bud any speculative tendencies”.  He added that the fight against speculation must also include the abolition of tax havens.  While much had been done to wipe out existing havens, “we must also strengthen the monitoring role of the Organization for Security and Cooperation in Europe (OSCE) to fight attempts at creating new ones”.