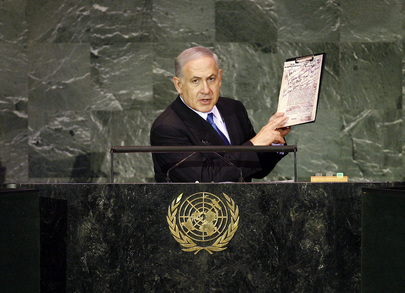 BENJAMIN NETANYAHU, Prime Minister of Israel, said the United Nations had been founded 60 years ago, following the Holocaust, and had been thereafter charged with preventing such horrors from ever happening again.  Yet nothing impeded that central mission more than “the systematic assault on the truth”, he said, decrying “the latest anti-Semitic rants” by Iranian President Mahmoud Ahmadinejad, during his address to the Assembly yesterday evening.
Mr. Netanyahu then held up a sheaf of Nazi meeting notes as physical proof of that regime’s horrendous work.  The preserved minutes had been taken at a meeting in the Villa in Wannsee, where on 20 January 1942, senior Nazi officials had laid out the plans for exterminating the Jewish people.  The documents had been recently given to him by the German Government.  “Is this a lie?” he asked.
He then presented to the Assembly the original construction plans of the Auschwitz-Birkenau concentration camp, plans that contained the authorizing signature of Heinrich Himmler.  Recounting United States President Barack Obama’s recent visit to another concentration camp, Buchenwald, he asked delegations if President Obama had been paying tribute to a lie.  He then recounted his own family history of grandparents, aunts, uncles and cousins who had perished, as well as the tattooed numbers on camp survivors.  All, he stated, added to the proof of the truth about the Holocaust.
He commended those who had refused to attend the General Assembly to hear the Iranian President’s speech, as well as those who had left in protest.  But he stated emphatically to those who stayed that in doing so, they had given legitimacy to a denial that was shameful and to a country that aimed to wipe out Israel.  Although the threats were currently levelled at the Jews, he reminded Member States that what had historically started as attacks on the Jews, had inevitably ended up affecting others.
He went on to say that in the past 30 years, fanaticism had impacted all people, and had been the cause of death of not just Jews, but Hindus, Muslims and Christians.  Any society that aimed to have only their version of true believers always subjugated those who didn’t conform.  That struggle, he continued, wasn’t about one group of believers against another, rather it pit civilization against barbarism, the twentieth century against the ninth century, and those who sanctified life against those who propagated death.
Affirming Israel’s commitment to participate in a global response to the myriad problems facing all nations, such as climate change issues, disease and the need for fossil fuel alternatives, to name a few, he said, however, that the main threat to all nations was the marriage between fundamentalism and weapons of mass destruction.  Indeed, the greatest challenge facing the world was that of preventing Iran from procuring nuclear weapons.  “Are the Members of the United Nations up to that challenge?” he asked.
He then turned to the recently issued report on the crisis in Gaza earlier in the year.  He viewed the document as falsely equating terrorists with those being targeted.  Recounting that Hamas had for eight years fired rockets on Israeli citizens, he said that there had not been one United Nations resolution condemning those criminal attacks.  And although Israel had unilaterally withdrawn from the Gaza Strip by removing 8,000 Israelis and 21 communities -- a move that many in Israel believed would bring peace -- Israel had been subjected to Iranian-backed terrorism to which the United Nations remained silent.  After eight years, Israel had been forced to respond.
He affirmed Israel’s desire for a permanent, genuine and defensible peace, and he reminded the Assembly that anytime an Arab leader reached out to make peace, Israel met with them, such as it had with Egyptian and Jordanian officials. “If the Palestinians truly want peace, I and my Government and the Israeli people, will make peace,” he said, recalling that when a two-State solution had been voted in 1947, Jews accepted the resolution but Arabs rejected it.
What Israel had wanted for 62 years was for the Palestinians to say “yes” to a Jewish State, just as Israel was asked to recognize a nation-state for the Palestinian people.  “It is as simple, clear and elementary as that.”  He stressed that peace, prosperity and dignity required security.  Israel must have its security and that the Palestinians “should have all the power to govern themselves except the handful of powers […] that threatened Israel”.