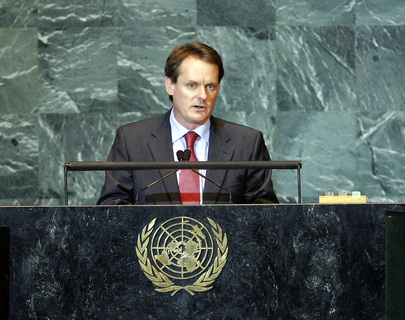 PETER POWER, Minister of State for Foreign Affairs of Ireland, expressed support for United Nations reform to strengthen the Organization’s ability to meet the challenges of climate change, global poverty and hunger, nuclear disarmament and non-proliferation, and the economic crisis, and he urged Member States to ensure a successful outcome for the Climate Change Conference in Copenhagen.  He said that more urgency was needed towards Security Council reform to make that body more representative and reflective of twenty-first century realities, as well as to improve its functioning and transparency.
Noting that 1 billion people on the planet went to bed hungry each evening as a result of “an enormous collective failure”, he said that hunger’s “eradication and nothing less […] must be our goal”.  Further, the outline for common necessary action was clear:  address the fundamental causes; invest in agriculture, agricultural research and support for women farmers; invest in rural infrastructure; enhance nutrition; and support national and regional plans. Ireland had made food security and related sectors a cornerstone of its aid programme, and would ensure that 20 per cent of that programme would be hunger-focused by 2012.
Ireland was proud of its long-standing contribution to United Nations peacekeeping, he continued, and welcomed the “New Horizons” initiatives, as well as the Organization’s partnerships with regional organizations in peacekeeping.  Ireland also contributed to conflict resolution, using lessons derived from its experiences with the Northern Ireland peace process.  On disarmament, he noted that only 10 ratifications were needed for the entry into force of the Convention on Cluster Munitions adopted last year, and urged Governments that had not yet done so to sign and ratify the document.  He further encouraged all Member States to work constructively for a successful outcome to next year’s review conference on the Nuclear Non-Proliferation Treaty.
The Human Rights Council and other human rights mechanisms must be able to address difficult rights situations in a timely and effective manner, he said, urging the cooperation of all Member States with the work of the International Criminal Court and the international war crimes tribunals.  He added that it was imperative to give practical effect to the concept of the responsibility to protect.
He welcomed efforts to reinvigorate the Middle East peace process and called for a halt to all settlement activities and improved living conditions in the Palestinian territories.  “Ordinary people must see in their daily lives the benefits which will derive from peace and must be encouraged to take risks for peace.”  He said all border crossings in Gaza must be immediately opened to normal commercial and humanitarian traffic and that there must be accountability for the most serious violations of international law which had occurred during the Gaza conflict at the start of the year.
On other matters, he urged Iran to comply fully with all its obligations and commitments to protect the human rights of its citizens, to cease uranium enrichment and answer all questions regarding its nuclear activities.  He urged collective support for the United Nations-African Union mediation in Darfur and for full implementation of the Comprehensive Peace Agreement.  He also condemned the recent conviction of Aung San Suu Kyi in Myanmar and drew attention to the urgent need for improvement in the humanitarian situation in Sri Lanka.