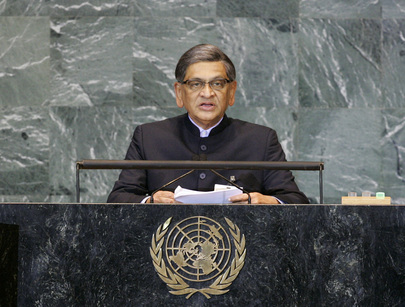 S.M. KRISHNA, Minister for External Affairs of India, said international response to the global economic and financial turmoil had to include measures to not only stimulate economies, but, more importantly, find ways to restructure the current international governance system.  To gloss over the structural deficit would imperil the future of a vast majority of the people of the world.  In the face of the crisis, hard-won gains in alleviating poverty, hunger, illiteracy and disease were being reversed, and the achievements of the Millennium Development Goals were seriously threatened. Policies of protectionism under those already adverse circumstances would exacerbate the situation.  It was imperative that the United Nations act in concert to coherently overcome those challenges.   India, which was actively engaged in the G-20 and other processes, had always stressed that developing countries must receive priority in any global response to the crisis.  He looked forward to an early implementation of the follow-up measures agreed to at the United Nations Conference on the Financial and Economic Crisis, during the course of this General Assembly.

He added that international trade and commerce had a central role to play in revitalizing global economic growth.  Committed to negotiations in the Doha Round, India strongly favoured fair and equitable rule-based multilateral trade negotiations, which recognized and addressed legitimate demands of developing countries.  He supported resumption of the negotiations at an early date and stood ready to engage with all World Trade Organization members to complete the modalities and address any outstanding problems.  To support that process, India had organized an international ministerial-level conference in New Delhi on 3‑4 September.

Stressing the priority importance of the reform of the United Nations, he said the collective attention of Member States should be given to the reform in the three essentials of the Charter, i.e. peace and security, development and human rights.  The General Assembly must be revitalized, and its role as the anvil of global deliberation must be strengthened.  The Economic and Social Council must become the fulcrum of development.  It must be accepted that the Security Council must be strengthened and made more representative by expanding its permanent and non-permanent membership.  Intergovernmental negotiations over the past six months had unambiguously established that an overwhelming majority of Member States shared the perspective that expansion in both categories of membership of the Council was needed.

India was engaged in the ongoing negotiations under the Climate Change Convention, including in the upcoming Copenhagen Conference, he continued.  It would work for an outcome that recognized the development imperatives of developing countries and was rooted in the principle of common but differentiated responsibilities and respective capabilities.  It was also necessary to move away from concentrating on mitigation only and ensure that there was focus on adaptation, which was crucial for developing countries.   India was hosting a high-level global conference on climate change, technology development and transfer in October, in cooperation with the United Nations, to help formulate a road map for technology in the context of climate change mitigation and adaptation to support the Convention process.

Accelerated economic growth and energy security were critical drivers for the achievement of poverty alleviation and livelihood security, he continued.  In pursuing its development goals, his country had been successful in significantly reducing its energy intensity.  It would continue to pursue that path.  Among India’s initiatives to address climate change, he mentioned its comprehensive policy and legislative framework, and a national action plan on climate change, as well as an unprecedented afforestation campaign with the doubling of the budget for forestry to $1.3 billion this year.  Measures had been approved to enhance energy efficiency and promote solar energy.

India had an impeccable non-proliferation record and welcomed the renewed global debate on achieving a world free of nuclear weapons, he said.  It had put forward a number of proposals on nuclear disarmament at the United Nations, including a working paper in 2006, proposing elements to fashion a new consensus on disarmament and non-proliferation.  Last year, his country had reiterated its proposal for a nuclear weapons convention, which would ban the production, development, stockpiling and use of nuclear weapons and provide for their total elimination within a specified time frame.   India would continue to engage with key countries to intensify that debate, with the hope that greater international understanding could lend itself to a firm commitment for action on nuclear disarmament.

It was in that spirit that he supported the adoption of the programme of work in the Conference on Disarmament this May, he said.  It was consistent with India’s position, to work with others there towards conclusion of a non-discriminatory, multilaterally negotiated and internationally verifiable fissile material cut-off treaty, provided it met India’s security needs.   India remained committed to a voluntary, unilateral moratorium on nuclear testing.

The barbaric terrorism attack in Mumbai last November had reminded the world of the daily menace of terrorism, he said.  It was the international community’s collective responsibility to work together to ensure that terrorists, organizers, perpetrators and supporters of such crimes were brought to justice.  To strengthen the international legal framework in that regard, India had proposed a comprehensive convention on international terrorism.  The discussions on the draft had gone on far too long, and it was time for the convention to finally be adopted.

Turning to the situation in his region, he said there was a new beginning in Sri Lanka; in Nepal, strengthening of the peace process was in the international community’s collective interests; and in Afghanistan, the international community must remain intensively engaged and support its development efforts and the maintenance of peace and stability.   India was committed to establishing good neighbourly relations and resolving all outstanding issues with Pakistan through peaceful dialogue.