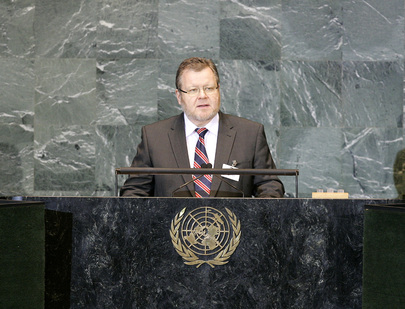 ÖSSUR SKARPHÉÐINSSON, Minister for Foreign Affairs and External Trade of Iceland, said that one year ago, Iceland had found itself at the beginning of the global financial storm that saw almost the entire banking system destroyed and left the country facing its most severe economic set-back in living memory.  The country had been the first to fall victim to the greed and excesses of Icelandic, as well as international, financiers who abused rules, followed dubious work ethics, hid money in tax havens and induced an irresponsible system of stellar bonuses that incited reckless behaviours far beyond anything the world had seen.

He said those responsible left in their wake a scorched earth and bewildered citizens full of sorrow and anger, who were scarred by the possibility of imminent bankruptcies and loss of their houses and jobs.  Iceland was, however, pulling through, not least because it had support.  The financial storm was beginning to break, both due to the resilience of the Icelandic people and because the international community had lent important support to the country.  That was the “punctum saliens”.  In a globalized world, problems needed to be tackled together.  The international community needed to fight the corruption that contributed to the international recession together, in order to ensure that the financial czars were not allowed to speculate again on peoples lives, to obliterate the tax havens they used and to create a sound global regulatory framework.

Turning to climate change, Mr. Skarphéðinsson said the best way to give the people of Kiribati and other nations that were threatened with obliteration from the face of the earth by drastic climatic changes was to put efforts into reaching a decision on a legally binding agreement at the Copenhagen Climate Conference that would strike at the core of the problem.  The best way to convince sceptics to take that step was to highlight success stories.  It was necessary to show that the goals were realistic and achievable.  A generation ago, Iceland had been as dependent on imported fossil fuel as any other nation.  A generation later, 80 per cent of its energy needs were met from renewable sources.  All the heating and electricity was now 100 per cent renewable.  What the country had done was to use the hydro and geothermal treasures that it had.  What it had done, others could do.  Its expertise was available and it had safeguarded the geothermal training programme of the United Nations University in Iceland.

He praised the work of the United Nations, saying that the Organization had done well in times when the odds had sometimes been heavily stacked against it.  He referred in particular to the United Nations work in the area of the rights of women and to the Security Council’s decision calling for global efforts to stop the spread of nuclear arms and boost disarmament.Iceland was a small nation, but it had a lot to offer, he went on.  That included its expertise in the geothermal field, which could be of vital importance against a climatic crisis; its experience in sustainable fishing, which could be instrumental in staving off depletion of stocks; and its geopolitical position and cohabitation with the Arctic for more than a millennium, which could be of great value in striking the right balance between fragile ecosystems and the use of resources