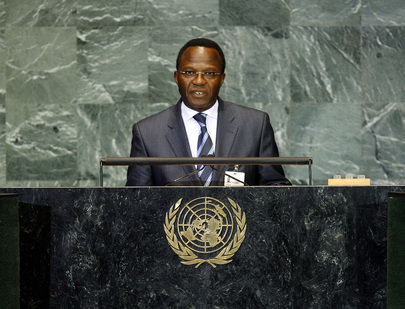 ALEXANDRE CECE LOUA, Minister for Foreign Affairs for Guinea, said that after the former President’s death in December 2008, Guinea’s armed forces had decided to take the country’s destiny in their own hands, to avoid social implosion that would have threatened peace, security and stability.  Guinea had been weakened, among other things, by political and economic bad governance, corruption, impunity, drug trafficking and the proliferation of light weapons.
The Conseil National our la Démocratie et le Développement (CNDD) had taken great strides to set in motion a transitional Government based on inclusive, participatory dialogue, which would lead to free, transparent and democratic elections.  It had also worked to combat drug trafficking, the embezzlement of public funds and organized crime. It had put in place social programs to provide water and electricity for the population and instituted measures to reform the security and defence sectors.  He hoped that, in cooperation with civil society, presidential elections would be carried out in January 2010.
He said the Government and the CNDD attached a great deal of importance to combating drug trafficking, which, over the past few years, had become more and more prevalent in the West African region.  The recent discovery of toxic substances and illegal laboratories in certain cities throughout the country illustrated how serious the problem had become.  He sought the international community’s support for Guinea in its bid to bring about a balanced strategy to fight against drugs, in line with the recommendations of the fifty-second session of the Commission on Narcotic Drugs, which took place in March 2009.
He said the Government had also taken action for a more ethical management of public funds, allowing it to allocate some of what it had recovered on water and electricity programs.  On behalf of his nation and people, he thanked a number of other African countries that had supported Guinea in its efforts towards a transitional peace process, unity, reconciliation and stability in the country.
Turning to broader issues, he said that new challenges called for a new world order of justice, solidarity and lasting development.  Such a world would only materialize once the international community had committed to aiding poor countries that had borne the brunt of, among other ills and challenges, the global economic and financial crisis.  Despite improvements in fighting pandemics, illiteracy and extreme poverty, much remained to be done to achieve the Millennium Development Goals.
Thus, fostering development partnerships that would scale up aid for Africa was indispensable, he stressed.  Foreign debt, which seriously hindered the eradication of poverty, also needed to be addressed.  It was time to restructure financial systems to help meet the needs of the twenty-first century.  Guinea supported increasing development aid and improving its quality in line with the Paris Declaration.  Further, creditors must be asked to support strategies that would make debt relief more flexible.  He urged the international community to support the New Partnership for Africa’s Development (NEPAD) towards gains in infrastructure rehabilitation, promoting human rights and democracy and attaining the Millennium Development Goals.