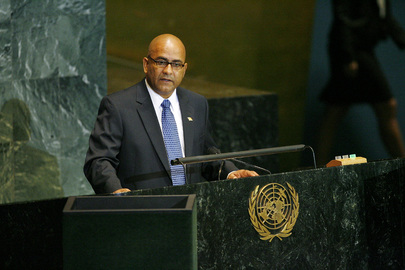 PETER DAVID, Minister of Foreign Affairs of Grenada, said the United Nations was the best place to face the numerous challenges of today’s world.  “We cannot respond to one challenge and choose to ignore another, because all are interconnected,” he said, adding:  “Indeed, working together is the raison d’être, the essence of ‘united’ in United Nations.”  Climate change remained at the top of the global agenda but for small island States, the threat was particularly pronounced, he said.  He called on the international community to support the most vulnerable and encouraged States to reach the targets set out for the upcoming Copenhagen Summit on the United Nations Framework Convention on Climate Change (UNFCCC).
With respect to the global economic and financial crisis, he said that his country has pursued sustainable economic development that included revitalizing the agricultural sector, increasing labour productivity, diversifying the export services sector, strengthening the national investment environment and modernizing their tax system.  He added that Grenada sought partnerships with the international community and the United Nations system.  Towards achievement of the Millennium Development Goals, Grenada had reduced violence against women, thereby increasing primary school enrolment, and had improved access to antiretroviral drugs for people with HIV/AIDS.
As to security, he said that there was a need for more intervention to stop drug trafficking and small arms proliferation, which he said was as lethal as nuclear weapons.  On the situation in Honduras, he called for the immediate restoration of President José Manuel Zelaya.  Concerning Cuba, he called for an end to the United States embargo.  He also called for a resolution to the long‑standing Palestinian-Israeli and wider Middle East conflict.  Finally, he said his country supported United Nations reform, particularly with regard to the Security Council.  “ Grenada is proud to continue playing its role at the United Nations,” he said.  “We support the pursuit of international peace and security, the rule of law, the fight against terrorism, and the eradication of poverty and the promotion of human rights.”