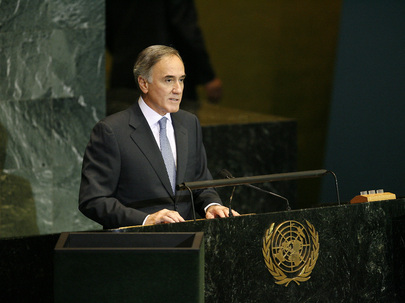 ANASTASSIS MITSIALIS ( Greece) said that the annual gathering at the Assembly was important, but not enough.  “What is needed first and foremost is political will –- will to turn words into deeds,” he said, adding that the international community was at a critical juncture.  The planet was in a state of environmental emergency, the socio-economic effects of which could dwarf the current economic and financial crisis.
He said the upcoming United Nations Conference in Copenhagen would be the litmus test of each country’s commitment to an ambitious, all-inclusive climate change agreement.  Greece had shown its commitment by supporting the most vulnerable countries’ adaptation to climate change with €21 million through the end of 2011.  Humanitarian and development aid, however, had to be streamlined to be more effective and productive, he said.
With respect to migration, he said that currently some 192 million people were being forced from the lands of their birth, and almost 1 million people have been arrested since 2000 while trying to cross from Turkey to Greece, in a quest for a better life.  The international community should work together to find solutions to that problem, as well as to the problem of human trafficking.  On the subject of human rights, he said that Greece has submitted its candidacy to the Human Rights Council and that women’s rights needed special attention.
Concerning security, he said that Greece was the Chair of the Organization for Security and Cooperation in Europe (OSCE) and, in that capacity, had aimed to build consensus and achieve collective solutions to long-standing conflicts.  The most significant achievement, he said, was the launch of the Corfu Process, a debate on the future of Europe’s security.
In the region, Greece had sought cooperation on a number of issues, but he added that long-standing disputes persist, among them one over the issue of the name of the former Yugoslav Republic of Macedonia.  Regrettably, no substantive or tangible progress had so far been achieved, despite the fact that Greece had taken “huge steps towards compromise”.   Greece had accepted the use of the term “ Macedonia” along with a geographical qualifier that reflected reality
In terms of Cyprus, he said that issue was still “an open wound at the very heart of Europe”.  A new round of talks had started under the auspices of the United Nations, but Greece opposed artificial deadlines, strict time frames and threats of a permanent division.  The current situation, he said, was unacceptable, but Turkey held the key to the solution.   Greece, for its part, was probably the most sincere supporter of that country’s inclusion in the European Union.  Despite Greek investment in rapprochement, Turkish jet fighters kept flying low over Greek-island homes and the Turkish Parliament maintained a threat of war against Greece.  “We need the leadership of the United Nations if we are to carry out our ultimate mission:  safeguarding the dignity, lives and freedoms of the citizens we represent,” he sai