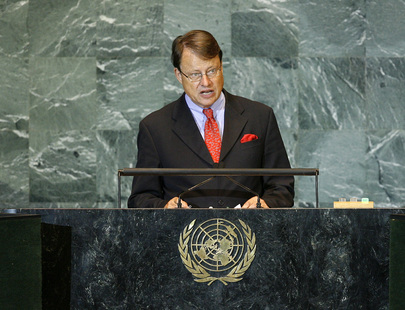 THOMAS MATUSSEK (Germany) said “in these tumultuous times” the consultations currently under way on a Charter for Sustainable Economic Activity were pointing in the right direction.  The economic crisis should be turned into an opportunity for development and a “green recovery”.  To prevent setbacks in achieving the Millennium Development Goals, donor States must continue their efforts for development.  Germany had continually increased its official development assistance (ODA) contributions over the years, and had increased the resources of the global financial institutions to ensure that States affected by the crisis would receive quick, effective help.
Developing countries must also live up to their responsibilities through responsible governance, respect for human rights, environmental protection, the fight against epidemics and the strengthening of women’s rights, he said.  Turning to climate change, he said joint action, through an inclusive process that included those countries directly affected by climate change, was required right now.  “History may not offer us a better chance for a fair, effective and ambitious climate deal”, he said, referring to the upcoming Copenhagen climate summit.
He warmly welcomed the new dynamic in the area of nuclear disarmament and expressed support for a nuclear-weapons-free world, and stressed that sub-strategic nuclear weapons must be incorporated into the ongoing disarmament process.  A new consensus at the 2010 Treaty on the Non-Proliferation of Nuclear Weapons Review Conference, a start to the Fissile Material Cut-off Treaty negotiations in Geneva and the entry into force of the Comprehensive Nuclear-Test-Ban Treaty were also needed.  The international community must not relent in banning all weapons of mass destruction, he said, citing the chemical weapons convention as a model.
He went on to urge Iran to grant a verification team from the International Atomic Energy Agency (IAEA) access to its newly revealed enrichment plant, and regretted that country’s lack of full cooperation with that body.  If Iran’s leaders continued to stall in demonstrating willingness for honest and speedy negotiations, the international community would have no choice but to take additional measures to underline the seriousness of its common concern.
Iran, one of the “origins of civilization,” could become an anchor of stability in the region, a respected member of the international community, he said, but that would involve, in addition to a diplomatic resolution of questions regarding its nuclear programme, a responsible foreign policy towards its neighbours, including recognition of Israel’s right to exist.
He said that 2009 was a pivotal year for Afghanistan.  The elections, the first in decades organized by the Afghans themselves, were an impressive sign of the resolve of the Afghan people to determine their own fate.  Under the difficult security conditions, further strengthening of security forces was needed.  Germany would continue to increase the number of its police instructors in the country and would help to advance the training of the Afghan Army within the framework of the International Security Assistance Force (ISAF).  Along with the United Kingdom and France, Germany had taken the initiative for an international conference to set out concrete, realistic and measurable goals for the further political and economic development of Afghanistan.
Finally, he said the United Nations must be reformed to reflect the realities of the contemporary world.  To deal effectively with current and future crises, the Organization’s revitalization must be coordinated with reform of the international financial institutions.  Germany advocated the inclusion of newly industrialized and developing countries as part of that exercise.  If the Security Council did not reform itself, there was a risk that other bodies would try to take its place.  He stressed that Germany was prepared to take on a permanent seat on a reformed Security Council, and that Germany underlined this readiness to take responsibility also with its candidacy for a non-permanent seat for the period 2011-2012.  Now, and in the future, Germany would work towards finding common interests, overcoming divisions and strengthening a global partnership of responsibility.