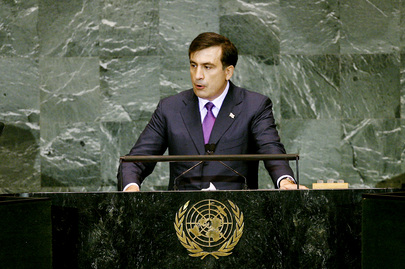 MIKHEIL SAAKASHVILI, President of Georgia, said the Assembly was meeting on the twentieth anniversary of one of the most successful triumphs of United Nations principles -- the fall of the Berlin Wall.  That event had ended an artificial line separating nations, dividing families, strangling freedom and imprisoning millions.  The Wall’s dismantling had done more than free the captive nations of the Warsaw Pact.  It had unleashed the hopes and dreams of millions living under the Soviet Union’s tyranny.  But if the past was honestly evaluated, the present remained bittersweet.  The vision of a whole, free and peaceful Europe was not yet accomplished.

Like Germany a generation ago, Georgia was today a nation with a deep wound running through it, he said.  A wall had cut off one fifth of Georgia’s territory, mocking the progress made in Berlin 20 years ago.  A year ago, Georgia had been invaded by tanks, warplanes, warships and State-directed hackers.  Hundreds of people had been killed or wounded, while tens of thousands of innocent civilians had been forced to flee in the face of ethnic cleansing that had been well documented by independent human rights organizations.  Those acts of brutality had gone unaddressed in direct contravention of international law, United Nations norms and internationally signed document designed to reverse such wrongs, he said.  “Indeed, those who unleashed war in Georgia said in this very Hall yesterday that they had to do it to implement the principle of indivisibility of security” in order to “step over the legacy of the past era”.

But the people of Georgia could not and would not accept a new dividing line across their country, nor was it a matter for Georgia alone, he stressed.  It was a threat to the values of the Organization.  Georgia did not expect the wall to disappear overnight.  It understood the need for patience.  History suggested that patience should not be passive, and for a wall to fall, actions must be taken to hasten its demise.  To that end, he thanked the nations that had resisted illegality, pressure and in many cases attempts at bribery, to recognize the Georgian territories now occupied by a foreign force.

He said the Georgian people had regrouped and were making real process on the path of peace, freedom and individual liberty.  Young children living in refugee camps outside Tbilisi symbolized the path Georgia had taken after the invasion in their unstoppable pursuit of a normal life and education.  The Government was also following through on its promises to strengthen democracy, foster pluralism and expand individual liberties.  Three months of opposition protest had been allowed to proceed unhindered, and opposition parties had been brought into meetings of the national security council.  Commitments had been made to the direct election of mayors in 2010 and new electoral rules were being drafted on a consensus basis for the next local and parliamentary elections.

Georgia’s biggest imperative was to continue to integrate all different groups into social life, he said.  It was also necessary to create more employment and recover from the economic crisis of the last year.  Georgia had just been named as the eleventh most attractive country for doing business, rising from 122nd place only a few years ago.  Clearly, it had not withered in the face of invasion, nor reduced freedom in the face of recession.  Indeed, it continued to contribute to the common goals established by the international community, even in the face of adversity.  It was in the vanguard of the battle against climate change, producing 85 per cent of its electricity from green and renewable sources.  Georgia was on the frontlines in confronting terrorism around the world with its allies, including in Afghanistan.