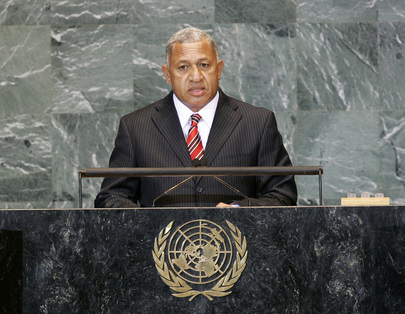 JOSAIA V. BAINIMARAMA, Prime Minister of Fiji, said his country and its people, like all small developing island States, were among the first victims of contemporary global crises such as the financial and economic crisis, the swine flu pandemic and, most dramatic of all, the phenomenon of climate change.  In small economies such as Fiji’s, those global events had very real effect on the daily livelihoods of the people.  His country had attempted to respond to them by making policy changes and adjustments, encouraging the people to grow their own food and discouraging food imports wherever possible.  Over the last two years, the size of the public service had been rationalized.  The country had maintained a very streamlined cabinet structure and significantly controlled Government operational costs.

There had been many critics of the events in Fiji since December 2006, when the military, with great reluctance, had been forced to remove the Government of Fiji, he went on.  Those critics, he said, were largely unaware of the extent to which politicians, in league with those who employed terror as a tactic to push a racial supremacy and corrupt agenda, had become a threat to the safety and security of the people.  The President of Fiji had abrogated the Constitution on 10 April, taking that step when a Court of Appeal ruling created a legal vacuum, a constitutional anomaly which would have also prevented the implementation of the reforms which were mandated by the President to achieve a truly democratic State.

Mr. Bainimarama said that on 1 July, he had announced a road map intended to lead Fiji to a new Constitution and elections based on equality, equal suffrage, human rights, justice, transparency, modernity and true democratic ideals.  The Government had been mandated to carry out and continue reforms which would ensure that true democratic, non-communal and equal-suffrage-based elections for parliamentary representation be held by September 2014.  Together with stringent steps to protect the economy from the effects of the world economic crisis, work would commence on a new Constitutions by September 2012.  The basis for a new Constitution would be the ideals and principles formulated by the Peoples Charter for Change and Progress, a document prepared following widespread consultation with and input from the people.  That Charter had been adopted by the President after its endorsement by the majority of the people of Fiji.

Asking for patience and understanding, particularly from Fiji’s neighbours, he invited “the international community to engage with us, visit our country to see the situation for themselves and to provide practical support and assistance to enable us to implement the reforms”.  Fiji’s dream was for equality, justice and true democracy.  He thanked friends who had continued to carry on a dialogue and who had helped the country achieve what they themselves now took for granted.  He thanked those friends for their respect and understanding, even when there was disagreement on some issues.  To those nations that had refused to engage with Fiji, he could only plead with them to change their stance.  Fiji was a small nation, whose people posed a threat to no one, least of all to the big Powers of the South Pacific “who have arrogated to themselves the right to dictate to us our future and the way we govern ourselves”.

Like most small island nations, Fiji regarded the threat posed by climate change as one that would undermine international peace and security, he went on.  The lives of real people from real places were at stake.  The future survival of real generations, the continuation of real countries and the security of belonging to real homelands were being threatened.  The impacts of climate change could only be halted and the survival of every small island State ensured by significantly reducing carbon emissions.  Fiji, as one of the more vulnerable States to the impacts of climate change, called on all States, in particular the major emitters, to be responsible and committed to carbon emission reduction targets of around 45 per cent from 1990 level by 2020 and 85 per cent reduction by 2050, with below 350 parts per million global atmospheric concentration and, further, to limit temperature increase to below 1.5°C above the pre-industrial level by 2020.