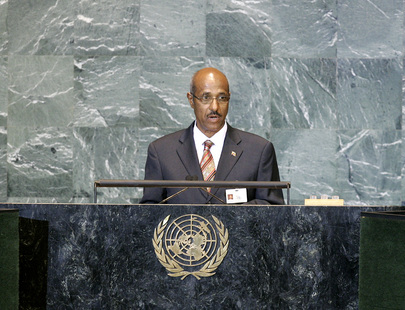 ATO SEYOUM MESFIN, Minister for Foreign Affairs of Ethiopia, said that 18 years since a military dictatorship of unprecedented cruelty had been removed from power in his country, the consequences of a lack of democracy within the context of great diversity were all too apparent.  The last 18 years had not been easy for Ethiopians, but Ethiopia had also made progress to democratize the country and lay the basis for rapid economic development.  Ethiopia was slated to register double-digit economic growth this year -- its sixth consecutive achievement of that kind -- despite the pressures coming from the global economic crisis.  The country had also irrevocably split from old times in terms of both individual and group rights.

As a neighbour sharing a long border with Somalia and a large population of Ethiopian-Somalis, it would be a miracle if Ethiopia had not been affected by what went on in that country, he continued.  It was not just Ethiopia had lost a partner because of the absence of a functioning government in Mogadishu.  It had also been directly affected by the crisis, which was being assisted and abetted, including by States whose authorities moved with ease and rubbed shoulders in civilized circles.  It was not only the rogue ones but also States that were ostensibly decent that continued to fuel extremism in Somalia and fund their activities.  Today in Somalia, there was greater coordination and cooperation among those who assisted the extremists than among those who professed support for the Transitional Federal Government.  As the latest horrific suicide attack on the African Union Mission in Somalia (AMISOM) had shown, those destroying Somalia were being emboldened, and their supporters rewarded.

The international community was being stingy even with symbolic steps to show resolve against extremists and spoilers in Somalia, he said.  The Intergovernmental Authority on Development (IGAD) countries had appealed to the Security Council; African Heads of State and Government had endorsed unanimously the IGAD call for the Security Council to stand up in support of the fight against extremism in Somalia.  However, it appeared, the Council did not consider Somalia a priority.  Meantime, those supporting extremism had made Somalia a priority.  It was critical that the international community wake up before the hijacking of Somalia by extremism was fully consummated.  What was missing was the political will.

Among other challenges, he mentioned climate change, saying that he looked forward to Copenhagen for a resolute move on the basis of the principle of common but differentiated responsibilities.  Climate change had affected his country’s agriculture and its plan for food security.  It was no longer every decade that the country faced drought, but rather every three or four years.  “If not drought, then it is a flood.”  In that connection, he thanked all those who had helped Ethiopia to mitigate and address the situation, particularly United States Secretary of State Hillary Clinton for organizing a meeting on Partnering for Food Security today.  At Copenhagen, Africa had decided to be represented by one negotiating team on the basis of a common African position.  It was an honour for Ethiopia to lead that team.

He also spoke about a “less than conducive international economic and […] political environment that we have to operate within”.  The country had faced a lack of tolerance to diversity, to policy-space experimentation and to independent thinking.  Unjustified conditionalities abounded, both for economic and political reasons, either because of objectives growing out of market fundamentalism or because Ethiopia had dared defend itself against unjustified aggression.  Ethiopia’s first real attempt at economic development had coincided with the period when market orthodoxy made the role of State anathema.  Perhaps that had changed.

The country could have achieved more over the last 18 years, but what it had achieved was not insignificant, he said in conclusion.  The country had also continued to discharge its responsibility in the multilateral arenas -- in the subregion, in the continent within the African Union, and beyond in connection with its obligations to the United Nations.  Within IGAD, it had done whatever was necessary, within the limit of its capacity, to help Somalia achieve peace and to shield it from the onslaught of extremist forces.  Within the African Union, it continued to discharge its responsibilities to maintain the Pan-African tradition and contribute to the peace and security of the continent.  The United Nations for Ethiopia was an organization it could not live without.  The country benefited from the United Nations in more ways than one.  Ethiopia also took its obligation to it very seriously.  It was in that spirit that Ethiopia continued to strengthen its contribution to United Nations peacekeeping efforts.  In that, it would continue without fail.