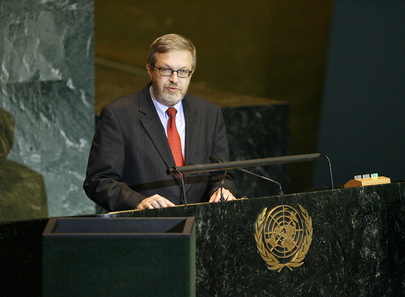 CARSTEN STAUR ( Denmark ) said the world needs the United Nations to “provide global answers to global challenges”, such as climate change.  The international community must act now to avoid potentially disastrous changes in the global climate, he said, and called for an agreement at the upcoming United Nations Climate Meeting in Copenhagen.  Such an accord must include a common goal for a significant reduction in CO2 emissions, a road to achieve those targets and the policies and measures to sustain them.
He went on to say that economic growth and checking climate change were not incompatible goals, as evidenced by the “green economy” of his own country.  He also reminded the Assembly of the security risks associated with climate change and welcomed the recent report of the United Nations Secretary-General on the issue.  On the subject of Millennium Development Goals, it was imperative that all donors delivered on aid commitments, particularly in light of the global economic and financial crisis.  Moreover, next year’s Summit on the Goals offered an opportunity to consider how they could be attained more expediently.
On peace and security matters, he said the international community should hold the Government in Afghanistan accountable while helping build its capacity.  In Pakistan, the international community should help with the creation of a stable, democratic and prosperous State, as such a move would further peace and development in the region.  He also noted the need for a comprehensive and speedy implementation of the Malakand strategy.  With regard to the Middle East, all parties should honour the Road Map.  Also, Denmark favoured expanding the diplomatic Quartet on the Middle East peace process with a regional dimension and that Syrian and Lebanese peace tracks should become a permanent Quartet agenda item.
Pirates operating off the coast of Somalia and other places presented a new type of challenge, which Denmark had taken the lead in trying to solve by identifying legal and practical solutions.  Finally, he called for reform of the Security Council and an overhaul of security assessments and procedures within peacekeeping operations.  “This Organization holds great legitimacy and moral force, and we encourage the United Nations –- Member States, as well as the entire organizational system –- to seize the moment and take the lead in addressing the new global challenges,” he said.