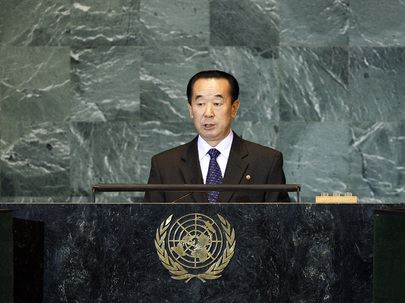 PAK KIL YON, Vice-Minister for Foreign Affairs of Democratic People’s Republic of Korea, said that one of the major tasks of the Assembly this year was to review the past in order to go forward.  He listed several challenges, among them an escalating Afghan war, the ongoing conflict in Iraq, “the cold winds of a nuclear arms race”, avian flu, global warming, stagnant economies and unemployment.  Meanwhile, the United Nations Security Council had become more arrogant, resulting in further inequality and prevalent double standards in international relations.
In terms of his own country, he said that the Democratic People’s Republic of Korea had entered a new phase of state-building.  “For over half a century, our country was compelled to produce bullets first rather than sweets, while suffering from nuclear threats and danger of war posed by hostile forces, but today we have settled down to channel our main efforts into the building of a great, prosperous and powerful nation.”
The Democratic People’s Republic of Korea had done everything in its power to remove nuclear threats and secure peace and stability on the Korean peninsula.  “However, our effort has not received due response from the United States,” he said, stressing that the arbitrariness of the United States had been revealed as it argued that the Democratic People’s Republic of Korea must not launch even a peaceful satellite.
His country had come to the conclusion that, as long as the United States did not change its nuclear policy, “we have no other option but to rely on our dependable nuclear possession to ensure nuclear balance of the region”.  The United States Administration should discard confrontational attitudes and show the change that had been talked about so much.  “We do not pursue a nuclear arms race […] the mission of our nuclear weapon is to deter a war.”
As for sanctions, he said they had been selectively imposed on his country and that unfair and unequal sanctions would not be accepted.  “If the United States comes to dialogue with sanctions, we will also participate in the dialogue with bolstered nuclear deterrence.”  With regard to north-south relations, he said progress had been made and that his Government would make all efforts towards reunification.
On the subject of United Nations reform, he described the Security Council as an “anachronistic organ”, and said that it was important to democratize the Organization by elevating the authority of the Assembly.  In conclusion, he said that his Government would make active efforts to strengthen its international relations.  “The foreign policy of the Democratic People’s Republic of Korea, as in the past and now, so also in the future, will be committed to the principles of independence, peace and friendship.”