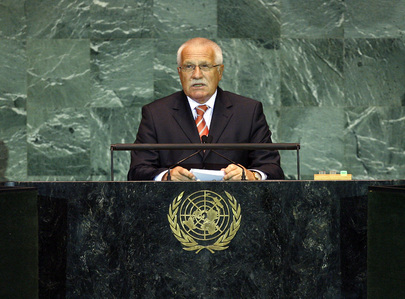 VÁCLAV KLAUS, President of the Czech Republic, said he firmly believed in the United Nations and supported reform of the Security Council to more adequately reflect the political and economic realities of the current world. Further, this year marked 20 years after the fall of communism and, in that time, his country had built a stable political democracy and transformed its economy into a functioning free-market one. That experience was relevant to discussions of how to solve the economic problems facing the world today.

He noted that measures taken to date to overcome the economic crisis had contributed to avoiding a repetition of the situation of the 1930s, and succeeded also in avoiding the repetition of a massive protectionist reaction. "Protectionism [.] should be resolutely condemned here today," he said. Although the first signals that the crisis had reached, or neared, its bottom were visible, he said the post-crisis period would be difficult and complicated. Attempts to increase aggregate demand had led to unprecedented expansion of public expenditures and public debt. Many of the Organization's Member States already had been facing or approaching a debt trap. The international flow of private capital was becoming less reliable. The fall of international trade undermined the continuation of export-oriented strategies of many emerging markets. Huge fiscal deficits would harm future economic growth of all countries.

Business cycles had always existed and would continue to exist, he said. In spite of them, the trend over the last two centuries had been characterized primarily by economic growth. "When looking for an appropriate reaction to the problems connected with the current crisis", he continued, "we should build on the idea that the crisis was basically a failure of Governments, not markets." The manipulation of monetary policy in an attempt to artificially prolong growth, the irrational subsidization of demand in the housing sector and the failures of financial market regulation contributed substantially to the crisis. "Let us not delude ourselves that the economic cycle and its consequences can be prevented by more extensive Government regulation or by aiming at global governance of the world economy."

The needs of all kinds of countries must be considered, he said. Global economic development would benefit from removing barriers, not creating new ones which would complicate the access of poorer countries to foreign markets and their ability to develop by their own means.

Economic recession and large increases in public debt had reduced the possibilities the world had to meet certain challenges, such as climate change, he continued. Measures proposed to that end represented another heavy burden for both developed countries, which were falling into deep fiscal deficits, and for developing countries. Rich countries, which often pushed the agenda at international fora, were losing their ability to compensate the poorer countries for the impact of these additional costs.