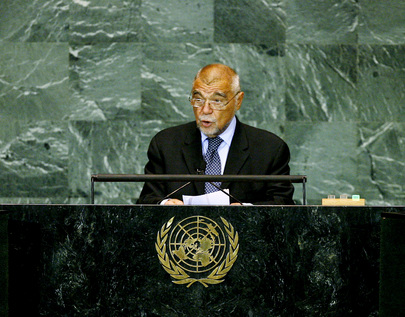 STJEPAN MESIĆ, President of Croatia, said that every issue, no matter how much it may appear to be regional, was in fact global in terms of its consequences.  The international community could not be content with a world where developing countries lagged behind, struggling with hunger, education and basic health care.  Many States and groups around the world were united in their inclination to use terror as a means of action and resorted to force to achieve their goals.  Although competition between the blocs no longer existed, the world had hardly become more secure.

The dominant economic model, based on greed, had sowed social unrest and bore the potential to erupt into social insurgency on a global scale, he warned.  The international community must dispel prejudices and stand up to discrimination on whatever grounds, while promoting and practising multilateralism and dialogue among civilizations.  The world was still in the process of learning the dialogue of multipolarism and could not yet face the fact that it was “not a crime to be different”.  With the shift towards multipolarism, the international community had not established a set of universal values, as indeed it had not, would not, and could not establish a single model of social and economic relations applicable to all.  The specific features of individual nations and civilizations must be respected, as there was no reason why anyone should be asked to renounce his or her culture or heritage.

Finally, he said that a world characterized by international peace, security and development was not possible without disarmament or the renunciation of nuclear weapons.  The problems of development would become minor if the huge funds currently allocated to armaments were channelled into development instead.