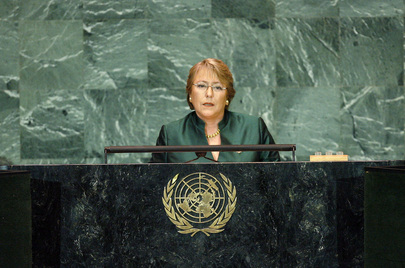 MICHELLE BACHELET, President of Chile, said that, while six decades of international collaboration had led to “significant progress”, the current economic crisis had given new urgency to the need for global collaboration on combating climate change and world hunger, among other things.  On the issue of poverty, she reminded the Assembly that more than 1 billion people suffered from hunger globally -- 50 million of them in Latin America alone.

She noted the “sad paradox” that at the same time Governments in developed countries spent trillions of dollars to revitalize the economy, the World Food Programme had seen its budget reduced by half.  She then observed that less than 0.1 per cent of what had been spent on the financial rescue plans could end the food crisis, and she added that the issue of global hunger should be put on the agenda –- in the Assembly and at the forthcoming meeting of the G-20.

“It] is not possible that, on the pretext of the economic crisis, the executives of the investment banks, which were at the centre of the current crisis, gambling irresponsibly with financial assets, should today be back to business as usual,” she continued, decrying the excessive bonuses still being paid out by some companies.  The world could not continue that way, especially since the collapse of financial institutions in some countries had revealed a “crisis of conception”, where the State and the public sector were now seen as parts of the problem, not the solution.  While widespread damage had thus far been averted, it was time for all to recognize the need for constructing realistic, fair and pragmatic models that ensured advancement for all peoples.

Turning to her own country, she said that, having learned the lessons of the past, Chile had developed stricter and more effective financial regulation and more solid macroeconomic foundations, with better capitalized banking systems.  “Today, reform cannot wait -– either domestically…or abroad.”  On the issue of the United Nations, she said Chile supported the Organization’s recent efforts in the areas of human rights, development and climate change.  Her country favoured reform and enlargement of the Security Council and supported the “important work” being done by the Peacebuilding Commission.

Regarding climate change, she warned that, unless the countries coordinate at the highest level, the upcoming Copenhagen Conference would not attain its goal, and she urged the Assembly, “Let us not use the economic crisis as an excuse for not reaching an agreement that our citizens are demanding.”