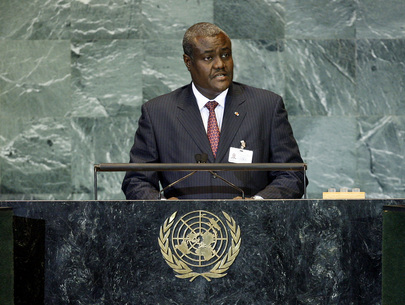 MOUSSA FAKI MAHAMAT, Minister for Foreign Affairs for Chad, said that this time last year, speakers had deplored the food, energy and financial crises that were hitting all at the same time, but which were affecting each of their countries differently, depending on their level of development.  For poor countries, those crises posed obstacles to attaining the Millennium Development Goals.  Those countries would continue to pay a high price for an economic crisis, which they had not caused, he said, urging developed countries to step up their efforts in alleviating its ramifications.
He went on to say that the negative impacts of climate change were a great cause for concern globally and for poor and fragile States in particular, since industrialized countries were largely responsible for global warming.  The disastrous effects were being felt in Chad on a daily basis, especially in sectors such as agriculture and livestock farming, as well as among the people, who suffered from famine and all manner of illnesses.  In that regard, he warned that without the international community’s full support, Lake Chad, the most significant example of such a catastrophic effect, could end up vanishing from the face of the Earth.
He said that despite some progress, the Chadian Government was seriously concerned by the situation prevailing in neighbouring Sudan’s western Darfur region.  He drew attention to how long that situation had been threatening regional peace and security, and specifically noted its impact on refugees and internally displaced people in eastern Chad, as well as on the environment.  Another consequence of the Darfur conflict was the recruitment of child soldiers, against their will, by numerous armed groups operating in the region.  Chad would be prepared to support all of the African Union and United Nations actions for a peaceful and durable resolution to conflicts.  He reiterated it was wrong to assume that Chad fuelled the war in Darfur by supporting Sudanese rebels.
Turning to the work of the United Nations Mission in the Central African Republic and Chad (MINURCAT), he expressed his country’s willingness to help that operation fulfil its mandate.  He deplored delays in MINURCAT’s full deployment, as such setbacks seriously impacted the security of refugees and internally displaced persons.  He expressed grave concern over the Mission’s future in light of Chad’s lack of capacity to adequately address and remedy challenges in the east of the country.  Nonetheless, whatever the outcome to the Darfur crisis, a political solution was imperative, so that vulnerable people in the region could reclaim their ancestral homelands.  While praising global efforts aimed at helping Chad and Sudan regain normal relations, he noted that many signed peace agreements now remained to be implemented.
Turning to national matters, he said Chad’s Government, through President Idriss Deby Itno, was pursuing political dialogue with the opposition in line with the 2007 peace accord.  Despite efforts by foreign-backed armed forces to threaten the country’s territorial integrity and democratically elected institutions, the Chadian Government still sought reconciliation and national cohesion.