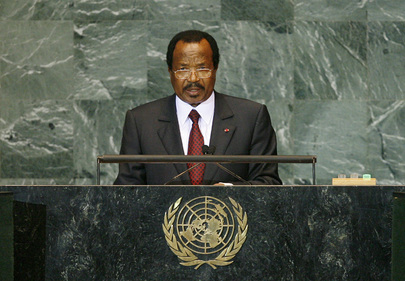 PAUL BIYA, President of Cameroon, said the strong response, led by the industrialized countries, to the global financial and economic crisis fully demonstrated the breadth of the international community’s responsiveness when it was driven by true political will.  Cameroon would have loved to see such international solidarity realized through the broad achievement of the Millennium Development Goals, with a common desire to narrow the gap between North and South to fight poverty, hunger and pandemics.
Africa had no role in the financial crisis yet had suffered greatly, he continued.  Among the most disturbing consequences were a decline in capital transfers to African countries, a drastic drop in the price of its products, a marked decline in investment, expanding budget deficits and an economic slowdown.  If the crisis persisted, the continent could suffer increased indebtedness, just as it emerged from years of economic recovery under rigorous structural adjustment programmes.
He said the international community needed to find a coordinated response that would include substantial financial resources without, as much as possible, imposing conditions.  Development, improved living conditions, and peace and stability in Africa hinged on such support.  He backed the decision made at the G‑20 Summit in London this past April to urge the International Monetary Fund (IMF) to grant more and softer loans, with lighter conditions, to the weakest economies.   Cameroon was aware that assistance could only be worthwhile if based on stringent management and good government.
Cameroon was also concerned with other issues -- the food crisis, reducing poverty, global peace and security, and climate change.  Like other continents, Africa had been hit severely by climate change even with its low levels of greenhouse gas emissions.  The drying up of Lake Chad, whose size had declined from 26,000 square kilometres in the 1960s to 1,500 square kilometres today, required the collective action of the Central African States.  They needed strong support from the international community, he said.  While acknowledging that the planet’s fate was everyone’s business, it was legitimate that the people of Africa be duly compensated by the international community for their efforts and sacrifices.  He hoped that the Climate Conference in Copenhagen would provide answers to Africa’s special needs.
He deplored the persistence of numerous conflicts, such as the situations in the Democratic Republic of the Congo, Darfur and Somalia.  He lauded the activities of the United Nations aimed at helping to stabilize those situations, but he said that doing so would require more appropriate human, financial and material resources for greater efficiency.  The United Nations also needed to strengthen its role as the crucible of multilateralism, as a forum of ideas, equity and equality, where all voices were expressed and taken into account.
The United Nations needed to adapt to current trends and changes in international relations.  He urged reforming the Security Council, revitalizing the Assembly and increasing the means of action of the Secretary-General.  The overhaul of the Organization needed to be fast-tracked so it was more democratic, credible and efficient, and gained the trust of people.