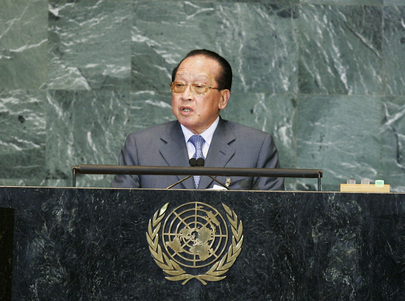 HOR NAMHONG, Deputy Prime Minister of Cambodia, noted everyone’s concern with the considerable challenges that the world faced today, such as the current global economic and financial crisis, climate change, food and energy insecurity and the threats of terrorism and weapons of mass destruction proliferation.  He hoped that the General Assembly’s deliberations would come up with new ideas to cope with all those global challenges.

There was no doubt that the present global economic and financial crisis would go down in history as a landmark case in the world’s economic meltdown, he said.  That global crisis had clearly undermined the Millennium Development Goals.  While the developed countries had more possibilities and resources to cope with the slowdown, the developing countries had suffered the most with a huge loss of national income as their economic growth was expected to fall sharply due to a drastic reduction in exports, which they had largely been dependent on, the falling of investment, the rising of unemployment, and so forth.  In order to help mitigate the impact of that economic and financial disaster on developing countries, he was of the view that everything possible should be done to get the Doha Round of negotiations back on track for a successful conclusion, in order to break down barriers to trade and better market access, particularly in agricultural goods, and to reduce agricultural subsidies.

In that regard, Cambodia appreciated the commitment of the G-20 made in Pittsburgh to “bring the Doha Round to a successful conclusion in 2010”.  At the same time, the Monterrey Consensus should be invigorated in order to help developing countries alleviate poverty and meet the Millennium Development Goals, he stressed.

Turning to climate change, which he described as another “serious threat to humanity”, the Cambodian Deputy Prime Minister noted that global warming had triggered more and more frequent cyclones, typhoons, extreme floods and droughts.  The worsening impact of climate change had now reached an alarming level everywhere around the planet.  According to the Asian Development Bank, South-East Asia would be the most affected region because of its geography of low-lying nations and long coastlines.

He said that, as far as Cambodia was concerned, being an essentially agrarian country with more than 80 per cent of its population whose livelihood depended on farming, the country was extremely vulnerable to weather-related calamities.  Fully aware of vulnerability in that regard, the country had been assuming its share of responsibility towards global warming since 2003, and had made its utmost efforts to implement the United Nations Framework Convention on Climate Change and the Kyoto Protocol by promoting Clean Development Mechanism projects, as well as implementing the national adaptation programme of action on climate change.  It had also launched a reforestation campaign.  At the same time, while he commended recent promises by the G-8, he questioned whether such pledges could match the speed of global warming.

Parallel to all those serious global challenges facing the world today, there were still political and security problems of great concern, he pointed out.  Terrorism had been threatening everywhere, causing deaths among the innocent.  To fight terrorism more effectively, greater and closer cooperation was needed among the many authorities concerned in order to face up to those criminal activities against humanity.  At the same time, he noted that there were countries that had the capacity to produce nuclear weapons that had not yet signed the Treaty on the Non-Proliferation of Nuclear Weapons.  The dissemination of weapons of mass destruction constituted another massive deadly menace to humanity.

He also supported United Nations reform, which he said needed to go beyond just the restructuring of the Organization’s organs, in order to enable the world body to engage itself more actively to revitalizing its primary role in world affairs.