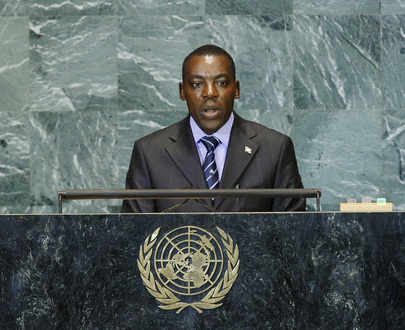 GABRIEL NTISEZERANA, Second Vice-President of Burundi, thanked the international community and the United Nations for supporting and restoring peace, which had returned to his country. He requested that consultative status be granted by the United Nations to the International Conference of the Great Lakes Region, which was working to maintain dialogue and cooperation and to ensure political stability and development in the region.

Noting that Burundi's last rebel movement had laid down their arms and were being integrated into the social and governmental structure, he said that, with the return of peace and democratically elected institutions, a sense of trust was being regained among the country's citizens. Internally displaced persons were returning. Former combatants were being reintegrated. However, that process was not without constraints, particularly given limited resources and land. Support from the international community was still needed to ensure reintegration efforts.

He said that the Government had also set up a commission aimed at encouraging Burundians to hand in their weapons. It was further clamping down on crimes linked to the use of firearms. A decree to these ends had just been made. The Government also welcomed support for its national reconciliation efforts. It was essential that Burundi find success in this transitional justice step.

Farther afield, Burundi was working to ensure peace throughout Africa by participating in peacekeeping missions in the Central African Republic, Darfur and Somalia. Tragically, 25 Burundians had been killed and more than 30 had been wounded in suicide attacks against African Union troops in Somalia. Public outcry in Burundi calling for the return of troops had followed that carnage, and the Government believed that the United Nations Mission's mandate must be modified to allow contingents to take the offensive, pursuing aggressors where necessary and in accordance with Chapter VII of the United Nations Charter. Among other things, air-strike capacity should be granted, additional troops deployed without delay and the sanctions that had been long promised against Governments and groups supporting Islamist extremist groups should be enacted.

He said that, in the run-up to local and national elections, Burundi's Government was resolved that an environment of calm should prevail. Towards that goal, electoral structures were being strengthened. The Government planned to grant $7 million to the Independent Electoral Commission, but would need further support from the international community. It saluted the changed already made to the mandate of the United Nations Integrated Office in Burundi (BINUB) in the electoral context. A positive outcome in the elections would allow Burundi to further redefine, in cooperation with the Secretary-General, the United Nations Mission there. His Government also hoped that electoral success would shore up prospects for economic development.

To improve aid effectiveness, Burundi had set up a partnership framework to foster consultation and dialogue among the Government and donors, and a truly active dialogue was now visible from planning to delivery stages, he said. The Government understood an environment of good governance was required, and had enacted a new Investment Code, as well as a series of reforms in its public finance sector. Burundi also intended to meet the planetary challenge of achieving the Millennium Development Goals. Towards that goal, the number of women giving birth in hospitals had risen substantially. Malaria was being treated gratis and bednets had been supplied to the entire population. In pursuit of education for all, 700 schools and health centres had been built in 2008. Unfortunately, financial means were limiting the ability to supply safe drinking water and pay the staff, and Burundi appealed to its aid partners for more support.

Turning to the financial crisis, he said Burundi had not escaped. Despite enacting economic policy measures to counteract the crisis, developing countries required additional assistance. He invited the developed countries, particularly the Group of Eight (G-8), to honour the promises made at the Gleneagles Summit in 2005. On climate change, courageous measures were also needed to limit carbon emissions and protect the environment. Burundi endorsed the common African Union position in that regard.