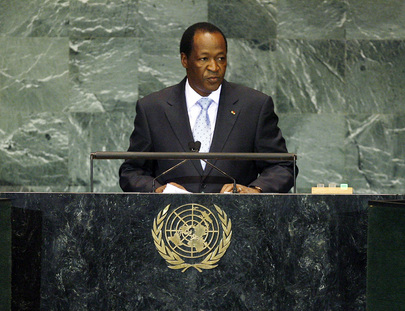 BLAISE COMPAORÉ, President of Burkina Faso, said that due to their weak and fragile economies, African countries had borne the brunt of the economic and political consequences of the financial crisis.  It was not fair for them to pay the price for a crisis in which they had played no real role in generating.  He urged the creation of development partnerships that would rectify the wrongs of a failing global economic system.
In the aftermath of post-crisis talks, he welcomed the prospects of a more virtuous system of global governance that would lead to sustainable development for all States.  It was crucial to boost aid to developing countries in order to ensure that the Millennium Development Goals were reached.  On climate change, he said floods were becoming more frequent, citing a deadly and destructive event that had inundated Burkina Faso in September 2009.
It was crucial for States to take action as a matter of necessity to find appropriate solutions to climate fluctuations and global warming.  In this regard, he thanked the international community for mobilizing to tackle those menacing issues and stressed that the upcoming Climate Summit in Copenhagen would be a prime opportunity to take bold decisions to protect people and the planet.  He announced that next month, his country would host the Seventh World Forum of Sustainable Development, focused on “Climate Change, Mobility and Sustainable Prospects of Development”.  That event would allow Africa, which had weaker means to adjust to the ramifications of climate change, to bolster its contribution to the global debate on the matter.
Turning to other matters, he said recurrent global conflicts posed a veritable threat to peace and international security, and hindered social and economic progress.   Burkina Faso was gravely concerned at the situation in the Sudan’s western Darfur region, and reaffirmed its willingness to help the Sudan reach a peaceful settlement.  The international community’s effort to pave the way for dialogue leading to a peace agreement between the two sides was indispensable.  On Somalia, he said States must support that country’s Transitional Federal Government in its bid to restore security throughout the war-ravaged peninsula.
On Guinea and Madagascar, he called on political players to engage in constructive dialogue in order to return to constitutional order swiftly.  He commended the African Union in its efforts to find solutions to troubled hot spots around the world.  Elections in Guinea-Bissau were an example of how far the international community had succeeded in its bid to foster peace.  In Côte d’Ivoire and Togo, the commitment of political actors meant that peace deals would be applied effectively.
He went on to say the proliferation of nuclear arms had posed a huge divisive threat to the international community for some years.  Thanking United States President Barack Obama for successfully organizing and leading a Security Council meeting on disarmament and the non-proliferation of nuclear weapons, he said that event could jumpstart the movement towards a world without nuclear weapons, whereby nuclear power would be more for civil purposes.  He urged for a cautious but determined approach to reforming the United Nations in general and the Security Council in particular, with a fairer representation of Member States, which would bolster the work of the Council and revitalize the General Assembly.