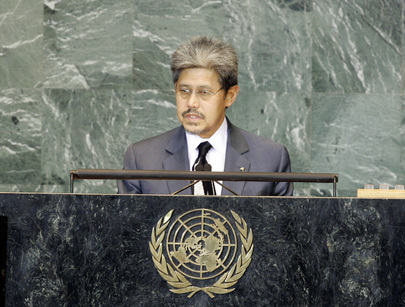 Prince MOHAMED BOLKIAH, Minister for Foreign Affairs and Trade of Brunei Darussalam, stressed that, for the time being, it was “not up to us to decide whether our work is successful or not; that is up to the next generation”.  Future generations could decide whether our responses to problems had been effective.  That was the way it had always been.  With hindsight, the United Nations had reacted very effectively over the past 25 years, since Brunei Darussalam had first joined the Organization.

Although things were much better today than they had been 25 years ago, many of the world’s old problems still persisted, namely terrorism, poverty, disease, war and the 60-year-long struggle of the Palestinian people.  He recognized the United Nations proposals for reforms, change and development, and said embracing those would change the direction of world affairs.  That, he said, was what people expected of Member States.

No one, he stressed, wanted to maintain the schisms between developed and developing countries.  Instead, they preferred to exist in one world that sought solutions to challenges.  The G-20 meeting in April had given States the choice either to stick to old habits dating back to 1946, or to work together towards change, regardless of their cultural and religious differences.  He added that the state of the environment, the global economy, energy and food supplies had also sent a message for countries to bring about changes.  The big decisions had already been made for us, he said, although that did not prevent States from taking them a step further.  Otherwise, he warned, those changes would fall into the hands of forces outside the grasp of countries, rendering their delayed responses ineffective.  Thus, he warned, the next generation might look back and judge, or worse, condemn, the international community.