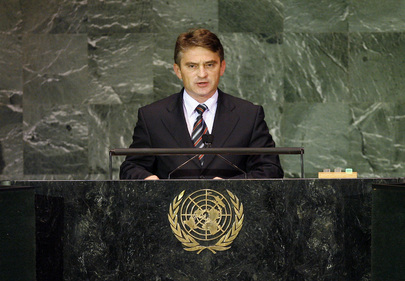 ZELJKO KOMSIC, Chairman of the Presidency of Bosnia and Herzegovina, said that one of the most pressing issues last year was the global economic and financial crisis, which had become the biggest threat to global peace and stability. "Global crises require global solutions," he said, stressing that if the international community failed to act, there could be unimaginable consequences. Welcoming the outcome of last June's High-Level Conference on the Economic and Financial Crisis and Its Impact on Development, he said the role of the General Assembly was to lead the process, to improve cooperation to eradicate poverty and to create global social justice.

The global economic crisis had jeopardized and compromised efforts to attain the Millennium Development Goals, one of the Organization's most noble tasks, especially for sub-Saharan Africa's poorest countries. However, he said developed countries must also take responsibility for helping Africa reach those Goals, including by doing everything they could to overcome the global economic crisis, by reforming the financial system and by making that system more transparent.

He said Bosnia and Herzegovina had made systematic efforts to accomplish the Millennium Development Goals, and it was currently preparing a development and social inclusion strategy with the United Nations. Turning to climate change, he said the international community must respond to this universal threat urgently, and expressed hope that the Copenhagen Summit would gain the support of all Member States and produce a solid post-Kyoto agreement. Political and economic interests should not hinder such goals to regain the loss of the natural balance of our planet.

On Organizational matters, he agreed that the United Nations in general and the Security Council in particular should undergo careful, prudent reforms to ensure better coordination and efficiency of all bodies of the system. There was overall consensus that reforming the Security Council would ensure more transparency by allowing non-member States, particularly those on its agenda and those ridden with crises, to take part in its work and help find the best solutions. While such a move needed to be made urgently, he called for dialogue and compromise when the time came to discuss the way forward.

Continuing, he said a group of countries from Eastern Europe must have another non-permanent seat in the Council, especially as the number of countries in that region had grown over the past two decades. He stressed that the Council must take more efficient use of preventive diplomacy. Indeed, taking such a course would ensure that crises were solved before they became full-blown conflicts. Overall, the United Nations should foster early warning mechanisms to help curb numerous crimes against humanity. He also noted his country's ongoing commitment to the work of the International Criminal Tribunal for Yugoslavia.

Turning to the global refugee crisis, he expressed his support for a joint United Nations and the non-governmental sector's efforts to tackle that problem, as the number of refugees grew every day, while viable solutions seemed ever more elusive. On United Nations peacekeeping missions, he urged Member States to do their utmost to ensure that such operations were more long-term oriented, efficient and culturally and geographically sensitive, by ensuring a clear assessment of the situation in the field and peacebuilding processes in order to find a universal sustainable solution.

The country's foreign policy was committed to finding long-lasting peace, security and stability within a democratic context. Smaller countries had to be encouraged to be part of the Council's decision-making process. Bosnia and Herzegovina's participation had been the topic of many international debates. Given its multi-ethnic, multinational and multi-religious state, it was willing to share know-how on building peace especially towards multiculturalism and reconciliation in a post-conflict context.