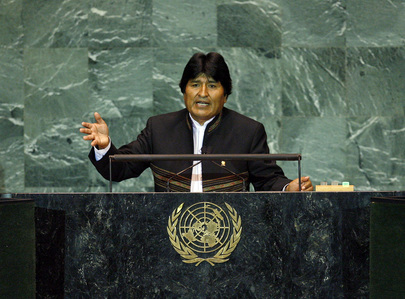 EVO MORALES AYMA, President of Bolivia, stressed the importance of unity, which was needed to resolve the current crises, meet the peoples’ needs, achieve dignity and, above all, tackle the deep asymmetries of today’s world.  A number of statements in the Assembly had focused on the origins of the crisis, but the majority of speakers had only referred to the effects rather than the causes of the current situation.  The origin of the crisis had been unbridled accumulation, commercialization of Mother Earth and, above all, capitalism.  There could not be social peace if there was injustice and inequality.
He said that United States military bases threatened social peace, democracy and integration.  They also provoked distrust among people.  “We know what uniformed personnel of the United States can do in a country.  When there are United States military bases in Latin America, social peace and democracy can not be guaranteed.”  For instance, there was a United States military base in Honduras, he added.
Commending the courage of President Zelaya, who had travelled to Honduras in peace and with the goal of restoring democracy, he exclaimed: “How good would it be if the United Nations were to issue an ultimatum to the military dictatorship in Honduras and if a democratically elected President were reinstated!”
Turning to climate change, he stressed the importance of living “in peaceful existence” with Mother Earth, which was life-giving, provided water, natural resources and oxygen.  Without ensuring the well-being of Mother Earth, it was impossible to guarantee the well-being of its inhabitants.  Earth could and would exist with or without human life, but human life could not exist without Mother Earth.  It was as important to defend the rights of Mother Earth as human rights.
In that connection, he suggested that developed countries must pay off their “climate debt” to the planet.  He also proposed the establishment of a “climate justice court” to try and punish those who damaged the planet.  A structure was needed to quantify the damage imposed by a number of countries and transnational corporations in that regard.  Finally, he presented to the Assembly a proposal, generated by indigenous civil society movements on the need to adopt a United Nations declaration on the rights of Mother Earth, a right to life, generation of bio-capacity, clean life and living in harmony.  He hoped that proposal would be taken into account in Copenhagen.  He also hoped the Conference would achieve important lasting solutions.
“If we want to change the world, we need to change the United Nations,” he continued.  In particular, a real democratization of the Security Council was needed.  It was necessary to eliminate permanent seats with the right of veto.  All the countries must have the same rights within the United Nations.  Through the democratization of the Council, democracy could be brought to the United Nations.
Expressing high hopes for the new Administration in the United States, he said that with the closing of Guantanamo Bay detention facility and other actions, progress had been made.  He hoped the economic blockade against Cuba would be lifted.  At the same time, certain custom tariff preferences had been given by former President Bush to some countries of Latin America.  Those decisions had been taken for political reasons, but the former President had never taken into account the recent constitutional developments in his country.
Mr. Morales also rejected accusations that he was encouraging the production of cocaine.  His Government had, indeed, launched a campaign for traditional use of coca leaf, but one should remember that coca leaf was not the same as cocaine.  Zero-cocaine policy did not mean eradication of coca leaf, which was beneficial and healthy for humans.  Coming from the unionist movement, he also denied the accusations that he had dismantled the unions.
He added that Chile and Bolivia felt sufficient trust to resolve the issue of maritime access bilaterally.  If that could not be done, the intervention of the international community might become necessary.