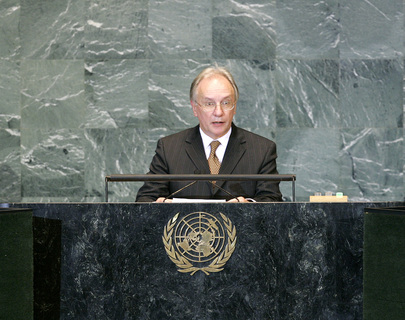 SERGEI MARTYNOV, Minister for Foreign Affairs of Belarus, advocated partnerships in international relations, saying that the intention of the world’s 20 largest economies to unite their resources to lead the world out of the global crisis was an important proof of their readiness to walk that path.  The same applied to some regional and subregional summits in recent months.  On a less optimistic note, however, the implementation of those agreements was still “in midair”, for instance on the issue of renouncing the use and dismantling existing measures of protectionism in international trade.  It should also be noted that the G-20 format, let alone G-8, was too narrow to be a representative partnership.  The engagement of economic regional groupings of states with significant potential -- for example the Eurasian Economic Community -- would make that format more representative.

He also believed in the great potential for dialogue and partnership between the Non-Aligned Movement and other major centres of power, he said.  The idea had been discussed at a recent Non-Aligned Movement summit in Egypt.  After all, today’s Non-Aligned Movement was a significant international factor, whose members made a tangible contribution to international security and were important actors in global performance.  He called on his colleagues from the European Union, United States, the Russian Federation and other developed countries to display their leadership in dealing with global challenges on unprecedented scale -- and to do that in partnership, in close contact and coordination with all members of the international community, including Belarus.

As a founding member of the United Nations, Belarus was sure of the Organization’s ability to play a leading role in generating partnerships in order to overcome most acute global problems, he continued.  It had been under the aegis of the United Nations that, after the tragic events of 9/11, the basis had been laid for the establishment of an anti-terrorism coalition and elaboration of a counter-terrorism strategy, and he suggested that the United Nations should consider proclaiming 11 September a “day of the fight against terrorism”.  He also recalled the successes of the Assembly-backed New Partnership for Africa’s Development (NEPAD) and the formulation of the Millennium Development Goals in the context of the global partnership for development.  Building upon the experience of the United Nations, Belarus had put forward the initiative of establishing a partnership against human trafficking and slavery in the twenty-first century.  For now it was an informal mechanism that had taken shape at the Vienna Forum against Human Trafficking in February 2008.  To work effectively, it had to be institutionalized.  That could be achieved through the adoption of a global plan of action against human trafficking by the Assembly.

Looking forward to the elaboration of new post-Kyoto arrangements this year, he advocated elaboration of a new global mechanism to improve access to new and renewable energy technologies for developing countries and countries with economies in transition.  The world needed a clear algorithm of coordinated action of key international stakeholders to ensure wider and universal use of advanced energy technologies and new and renewable sources of energy to ensure the achievement of Millennium Development Goals.  Belarus was going to initiate a comprehensive study of that issue with the involvement of leading international experts, and include the results of that work in a future report of the Secretary-General.

He also emphasized the role of middle-income countries in economic and social progress, saying that last year, his country, together with its partners, had initiated the adoption of a resolution on development cooperation with those countries.  For the first time, a substantive discussion was held in the Assembly on how to make the best use of the capacity of the United Nations system to assist such countries in dealing with their specific problems.  He hoped the Assembly’s work in that field would not be regarded through the prism of competition for scarce resources of the donor community and the United Nations.  The real point was that the larger the number of economically prosperous States, the stronger and more predictable the world economy would be.

With the possible outcome of Copenhagen not clear, all countries, large and small, had to do their utmost to ensure its success.  Belarus was the only State in the world which, for several years now, had been trying to assume significant commitments on reducing harmful emissions, which happened to be more significant than those of many of its neighbours, including some European Union countries.  Speaking bluntly, he said he did not understand why many States and powerful groups of States that were leading in the post-Kyoto advocacy “did not allow us to assume legally binding and significant Kyoto commitments”.  He hoped that the call of Belarus for speedier ratification of her Kyoto amendment could be heeded.

In conclusion, he proposed to regard the 2010 United Nations summit -- the only forum uniting Heads of State and Government of G-8, G-20, European Union, Non-Aligned Movement and the Commonwealth of Independent States -- as a “summit of partnerships”.  At the summit, he proposed adopting -- at the level of Heads of State or Government -- a mechanism or plan of close cooperation of Member States for years to come on how to overcome global challenges.  In the next few months, delegations could make their suggestions regarding the substance of such a document.  Negotiations on the outcome could start in January 2010.