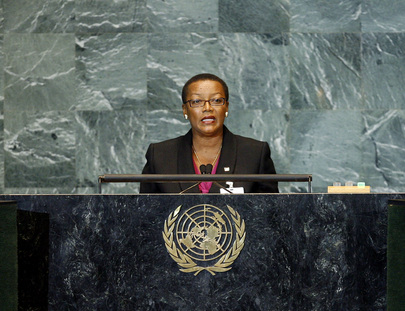 MAXINE MCCLEAN, Minister for Foreign Affairs and Foreign Trade of Barbados, said that the confluence of so many devastating crises of an international and multidimensional character demanded a global response, yet the approach of the developed economies had been to address their domestic interests almost exclusively.  Faced with stagnating or falling economies due to factors beyond their control, developing countries were left to deal with declining economic activity, a consequential rise in unemployment and its resulting problems, at a time when they were battling increasing debt and decreasing external trade and foreign investment revenues.  Rescue packages must be created beyond those for the least developed countries, including for such highly indebted middle-income countries as Barbados.
The small group of nations that fell into that group had been shown, through World Bank research, to be extremely susceptible to external shocks, she said.  However they continued to be excluded from concessionary financing and debt relief.  Noting that reliance on per capita income was a poor indicator of economic sustainability, she said these countries needed adequate support mechanisms with revised eligibility criteria, so that their development would not be derailed.  “This crisis presents an opportunity for the developed economies and the international financial institutions to address the existing failures and shortcomings of the current financial system,” she said.  “The time is right for the crafting of a new, more transparent architecture, which is supportive of development objectives.”  Development required the involvement of communities, the private sector and civil society, she added.
The United Nations must not be marginalized and should play a greater role in global economic decisions, she continued.  The challenges currently faced by the world community required comprehensive United Nations reform, which to date had been piecemeal and uncoordinated, even conflicting.  There must be a commitment to finalising the reform agenda, with Security Council reform receiving the highest priority.  The Council did not reflect current global realities.  There should be expansion in both the permanent and non-permanent membership.  A collective effort must be made to restore the United Nations to the role as envisaged by its founders:  “To be a centre for harmonizing the actions of nations,” she said.
Barbados was concerned by the tendency of limited membership groups to assume decision-making powers on issues that affected the entire international community, she said.  The opportunity to create a fair and more equitable system of global governance could be squandered if the responsibility for decision-making remained with such groups.  “No exclusive countries, no matter how big, powerful or rich, have a monopoly on solutions,” she said, noting that the United Nations Convention on the Law of the Sea, the Climate Convention and the International Criminal Court were all championed by some of the smallest Member States.
She strongly condemned the targeting of small offshore jurisdictions in the wake of the global crisis, noting that that crisis had resulted from excessive risk taking, corruption and fraud, and ineffective regulatory controls and oversight in the developed world.  She fully supported the proposal of CARICOM to build upon the existing programme already in place in the United Nations to address issues related to international financial services.  Specifically, she called for the Committee of Experts on International Cooperation on Tax Matters to be transformed into an intergovernmental subsidiary body of the Economic and Social Council.
She joined CARICOM and the Organisation of American States in calling for the immediate reinstatement of the legally elected president of Honduras and hoped that the renewed dialog between the United States and Cuba would lead to the lifting of the embargo against Cuba and normalization of relations between the two States.  She further called for the extension of the United Nations Stabilization Mission in Haiti (MINUSTAH) by the Security Council.
On climate change, she said that “a massive transformation of the way energy is generated and used to propel economic growth and development” was required.  Barbados was committed to reducing dependence on foreign oil and increasing use of renewable energy and had plans to transition to a green economy.  These activities had been undertaken with minimal support from the international community.  An increased share of the budget has had to go to adaptation measures.  According to World Bank estimates, the total annual impact of potential climate change on all CARICOM countries would total around 11.3 per cent of their total combined GDP.  The international community had a moral and ethical responsibility “to support urgent and ambitious action to provide adaptation funding for Small Island Developing States.”
In closing, she joined the Prime Minister of Trinidad and Tobago in calling for the convening a special session of the General Assembly on chronic non-communicable diseases.