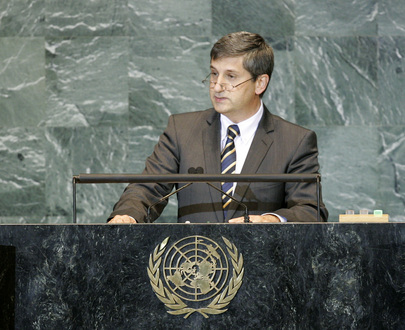 MICHAEL SPINDELEGGER, Minister for European and International Affairs of Austria, said an important focus of his country’s work as a member of the Security Council for the years 2009–2010 was to improve the protection of civilians in armed conflict. Despite significant progress, armed conflicts continued to darken the lives of men, women and children in many parts of the world.   Austria had been working actively with others on the expansion of the monitoring and reporting of child rights violations.  It fully supported Security Council resolution 1820 (2008) and the follow-up resolution to be adopted next week as a decisive response of the international community to sexual violence in conflict situations.  At the same time, the country attached great importance to the participation of women in the promotion of peace and security.  Austria would use its Security Council presidency in November to identify concrete measures to improve the protection of civilians, he said, and invited all partners to join an open debate of the Council on that subject on 13 November.

To achieve sustainable peace, security and development, peacekeeping needed to be complemented by rebuilding functioning institutions, particularly in the judiciary and security sector, continued Mr. Spindelegger.  In that context, the efforts of the United Nations Office on Drugs and Crime (UNODC) in combating corruption, organized crime and drug trafficking were to be commended.  Austria was also committed to the work of the Peacebuilding Commission and had recently joined the country-specific configuration for Sierra Leone -- a model case for successful peacebuilding.

Peace, security and stability were preconditions for sustainable development, he went on.  Eradicating extreme poverty and hunger still continued to be one of the main challenges of the international community.  Achieving the Millennium Development Goals by 2015 was far from assured.  In view of the global financial crisis, increased efforts by the international community were urgently needed.   Austria would contribute to that global endeavour.

“All those efforts will be in vain if we are unable to protect our planet,” he said.  Climate change was a fundamental threat to humankind -- aggravating poverty, hunger, environmental degradation and insecurity, and thus seriously threatening the achievement of the Millennium Development Goals.  The United Nations Climate Change Conference in Copenhagen in December must decide on concrete actions to curb climate change based on mutual trust and strong international cooperation.  Climate and energy could also be an important part of the international community’s response to the current economic crisis.  Investments in green technologies and sustainable, affordable and stable energy supplies would benefit both the economy and the climate.

The Security Council Summit on nuclear non-proliferation and disarmament earlier in the week issued a strong call for a world free of nuclear weapons, he went on.  For that vision to become reality, progress was needed on several fronts, including the entry into force of the Comprehensive Nuclear-Test-Ban Treaty, progress on a fissile material cut-off treaty and reinforcement of the Treaty on the Non-Proliferation of Nuclear Weapons.  It was also indispensable that Iran fully comply with all relevant Security Council resolutions with regard to its nuclear programme and to closely cooperate with the International Atomic Energy Agency (IAEA).  “The time has now come for Iran to finally enter into a constructive dialogue with the international community,” he said.  The debate during the week had clearly shown that the world would not accept an Iran armed with nuclear weapons.