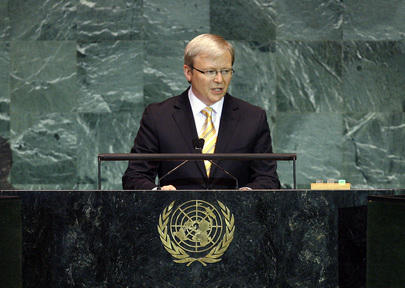 KEVIN RUDD, Prime Minister of Australia, said much remained to be done in connection with the world economic crisis, which had brought such carnage to the world markets. The crisis had been a wake-up call for the international community to reform the institutions of international financial governance. The failure of those institutions was not only a matter of concern -- the price of their failure had been paid by working people all over the world. His country had also been seriously affected by the crisis. The G-20 were trying to address the issue, with Governments acting in concert to stabilize the global financial system, introduce stimuli, promote confidence and initiate a financial market reform programme.
Those extraordinary interventions had succeeded in breaking the fall, but economic recovery was far from certain and more turns and twists lay ahead, he continued. The financial reform must be completed. It was also necessary to agree on emergency interventions and articulate a new framework for sustainable future economic growth. One of the failures of the old system lay in the lack of global economic coordination and supervision. The G-20 would need to build on the structures of cooperation and apply them to the challenges of global recovery. The meeting in Pittsburgh presented an opportunity to achieve balanced and sustained growth. Among other proposals, he also mentioned the need for the International Monetary Fund to analyse individual national economic plans to see whether they were sufficient, as well as a German proposal on the adoption of a charter of sustainable economic activity.
With little time remaining before the climate meeting in Copenhagen, not enough action had been taken, he said. The collective political will had not been sufficient and mutual recriminations had become prevalent. What was required globally was the leadership to embrace the truth that all the Governments needed to reach beyond their own reasons and arrive at "a grand bargain" on climate change, anchored in science and the need to avoid a catastrophic climate change. Among the challenges were binding targets, public and private financing arrangements to support adaptation and mitigation, and transfer of technology issues. All available mechanisms for international cooperation should be used. Copenhagen would be a test of collective leadership. As chair of the Pacific Islands Forum, he knew that time was already running out for small island States. The South Pacific was part of the human face of climate change, and Australia was prepared to act on that great challenge.
Turning to nuclear weapons, he said that nuclear tests by the Democratic People's Republic of Korea this year had been rightly condemned by the international community. He was encouraged by the commitment by the United States and the Russian Federation to further reduce their arsenals. The NPT had played a crucial role, but a successful review conference in 2010 was needed to reinvigorate the process. Australia and Japan had recently established a commission to chart a realistic course to achieve a strengthened non-proliferation regime. In that regard, tomorrow's Security Council meeting on non-proliferation and disarmament was of great importance.
The realization of the Millennium Development Goals was fundamental for the elimination of world poverty, he continued. That was a core reason why his Government was committed to devoting 0.5 per cent of gross national income for official development assistance purposes. The Doha Development Round was taking too long, due to the deficit of political will. Australia, as one of the lead negotiators, was ready to work to bridge the gaps.