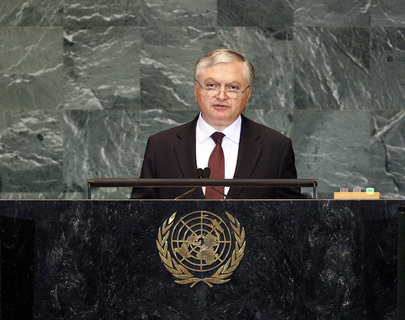 EDWARD NALBANDIAN, Minister for Foreign Affairs of Armenia, said that the economic and financial crisis had touched all parts and sectors of the world, making attainment of the Millennium Development Goals less likely for many countries.  After noting Armenia’s support for United Nations reform, and praising the creation of the Peacebuilding Commission and Human Rights Council, he went on to note the importance of preventing genocide.
To that end, he praised a recent report by the Secretary-General on “Implementing the Responsibility to Protect”.  “Genocides do not happen all of a sudden,” he said, adding:  “The instigators propagate intolerance and hatred, setting grounds for violence.  As survivors of genocide, we Armenians welcome all efforts to prevent and combat racist and xenophobic attitudes.”
Among its goals, the international community should seek to eliminate the “militaristic aspirations” of some States, he said.  Turning to Nagorno Karabagh, he said that the peace process was moving forward and that the Foreign Ministers of Armenia and Azerbaijan were meeting on a regular basis.  Yet, the parties should commit to refrain from steps that could hamper dialogue and the peace process.  He stressed that:  “ Azerbaijan consistently misrepresents the essence of the Nagorno Karabagh problem, like two days ago in this forum, trying to smother ethnic cleansings and its policy of violence against the people of Nagorno Karabagh.”
He went on to say that the international community recalled the Azerbaijani open aggression, large-scale hostilities and war against Nagorno Karabagh, with the help of mercenaries closely linked to terrorist organizations.  Such aggression had ultimately claimed the lives of tens of thousands of civilians.  He said there was a serious basis for the settlement of the Nagorno Karabagh problem if the provisions contained in the Declaration signed in 2008 by the Presidents of Armenia, Azerbaijan and the Russian Federation, and the Declaration of the Foreign Ministers of the Co-Chair countries of the Minsk Group, among other agreements, were implemented.
As to security in the region, he said that the South Caucasus had long been overlooked, although it was one of the “most sensitive hot spots on the world’s political map”, devastated by conflicts and tensions.  However, he said, the process of normalization of the Armenian-Turkish relations started last September, known as “football diplomacy”, promised to be fruitful, and he expressed confidence that the mentality of the past could be left behind.  In conclusion, he said that the bridges between the United Nations Member States had to be reinforced.  “Only together can we withstand these challenges and push ahead the international development agenda.”