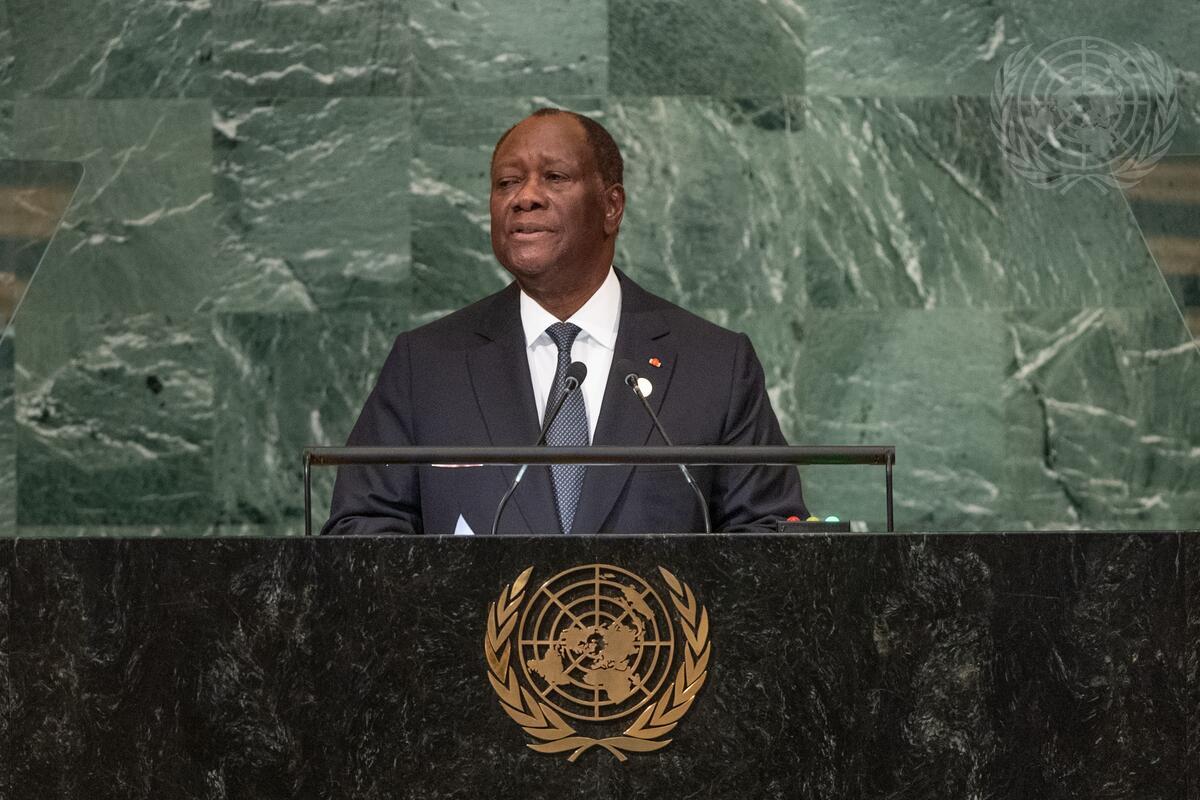 ALASSANE OUATTARA, President of Côte d’Ivoire, noted that the war in Ukraine — with the risk of recourse to nuclear weapons — continues to undermine world peace, with serious economic, financial and social consequences for African countries.  The rise in the price of oil and the difficulties in supplying the markets with cereals and fertilizers have led to generalized inflation, an increase in interest rates on international markets and in the prices of basic necessities and cases of famine, due to their dependence on cereals and fertilizers from Ukraine and the Russian Federation.  His Government has had to subsidize the prices of petroleum products and wheat and to temporarily cap prices.  Expressing regret that only 17 per cent of wheat exported from Ukraine since the July agreement has been earmarked for African countries, he again requested that priority be given to them, issuing an urgent appeal to international financial institutions and development partners to mobilize necessary resources to support fragile States.

He noted that his country has hosted the United Nations Operation in Côte d’Ivoire (UNOCI), one of the largest peacekeeping operations in Africa, and welcomed the country’s participation in the United Nations Multidimensional Integrated Stabilization Mission in Mali (MINUSMA) and the United Nations Mission in the Central African Republic (MINURCA) — citing those Ivorian soldiers who died to serve the cause of peace in Mali.  Unfortunately, he said 46 Ivorian soldiers deployed within MINUSMA have been unjustly detained there since 10 July 2022, calling for their immediate release.  He encouraged Malian authorities to focus efforts on the fight against terrorism and on implementing the various stages of the transition schedule and political reforms in view of presidential elections scheduled for February 2024.  With terrorism still representing a major threat to international peace and security, States must strengthen collective instruments in the fight against this scourge.  He welcomed the decisive action of France and its European partners in the Sahel and reiterated the call for greater involvement of other major Powers in the fight against terrorism there and in the Gulf of Guinea, in support of national armies, the Economic Community of West African States (ECOWAS) and the Accra Initiative.

The Assembly session is being held as the energy crisis following the war in Ukraine undermines progress in reducing greenhouse gas emissions — in particular due to the return, in certain industrialized countries, of the use of carbon-based fuels.  Time is running out to implement all commitments under the Paris Agreement on climate change, he stressed, to stem global warming below the threshold of 1.5°C.  Developed countries must drastically reduce their greenhouse gas emissions and honour their commitments to mobilize $100 billion per year for developing States.

He pointed to the 2022 United Nations Climate Change Conference — Twenty-seventh Conference of the Parties to the United Nations Framework Convention on Climate Change, or COP27 — to be held in Egypt in November, which will offer a new opportunity to renew the political commitment of all stakeholders in financing the fight against global warming.  Côte d’Ivoire will respect its commitments under the Agreement and work to protect its forest cover and rich biodiversity — which is the whole meaning of the Abidjan Legacy Programme.  Citing the exceptional mobilization and financial support of development partners for the Abidjan Initiative, which has quickly raised more than $2.5 billion, he also called for an in-depth reform of the Security Council, within which Africa would find its rightful place.