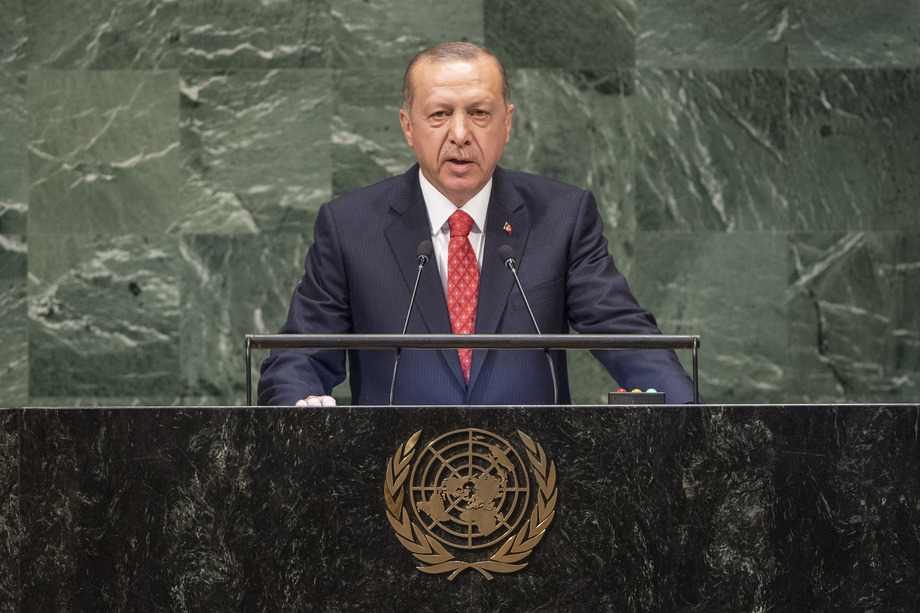 RECEP TAYYIP ERDOĞAN, President of Turkey, said the United Nations has moved away from meeting the expectations of humanity for peace and welfare, particularly as the Security Council only serves the interests of its veto‑right-holding members.  Stressing that Turkey will continue to be on the side of the oppressed Palestinian people and to protect the historical legal status of Jerusalem, he called for comprehensive reform to the structure and functioning of the United Nations, adding that budget reform alone will not address the Organization’s problems.

He went on to identify justice as one of the most important tasks that can be performed through the United Nations, noting that the circle of justice has been shattered in many parts of the world.  Citing the enormous global wealth gap, migration and infant mortality rates, he called for a global administration system to help the impoverished and give future generations hope.  To date, his country has spent $32 billion hosting 4 million refugees.  Further, it has secured the Idlib de-escalation area in Syria, allowing for humanitarian aid to reach millions, despite a lack of external support.

He also noted that his country is contributing to the work of the United Nations through substantial initiatives, including: the Mediation for Peace Initiative, the Organization of Islamic Cooperation, efforts to implement a development programme in Somalia, efforts to resolve the Gulf Crisis and actively responding to developments in Syria.  The recent Sochi Agreement signed with the Russian Federation has prevented bloody assaults in a region of Syria where 3 million civilians live.  That accord will clear the way for a peaceful solution to the crisis.  Countries that support terrorist organizations and closed borders to refugees will not secure a safer and more prosperous future, he stressed.

Turning to the threat of terrorism, he said that not all terrorist organizations obtained their power through armed actions.  Many engage through covert and deceptive methods.  He pointed to “FETÖ [Fethullahçı Terör Örgütü], which attempted a coup d’état” in 2016, and which has done so through non‑governmental organizations, among other “glossy concepts”, he said.  Although it has been eliminated from the country, the organization was now active in other parts of the world.  Several countries have not heeded warnings of the risks posed by that group, including the United States where the organization receives government funds in 27 states.

Trade wars are harmful to humanity, he said, stressing that States must not remain silent in the face of spreading protectionism and the use of economic sanctions as a weapon.  The international community must work together to prevent damaging the world trade regime.  However, some countries were persistently trying to create chaos.  Turkey is in favour of free trade and movement of persons.  Lastly, highlighting both youth and the elderly, he called for the establishment of a United Nations youth organization, to be based in Istanbul, as youth is the future of the world.  He also noted that the United Nations International Agency on Aging was being established in Istanbul, where the third World Assembly on Aging will take place.