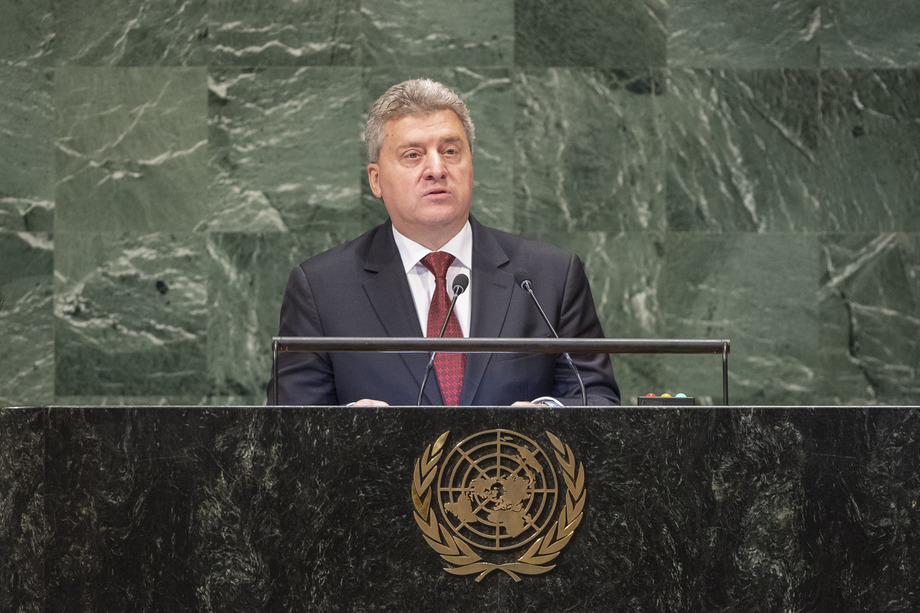 GJORGE IVANOV, President of the former Yugoslav Republic of Macedonia, recalled that “as a constitutive republic with a right of self-determination to secession, Macedonia was a co-founder of the United Nations”.  Although his country became a member of the United Nations in 1993, it was denied the sovereign right to call itself by its name.  According to some, the adoption of the Prespa Agreement will put an end to the name dispute with Greece and open a way to membership of his country in the European Union and the North Atlantic Treaty Organization (NATO).  Yet, this Agreement violates the universal principles and standards outlined in its preamble, notably the right to self-determination, he stated.

Greece seeks to impose a new name, asking for an erga omnes implementation, he continued, adding that “the aim is to limit the use of the name ‘Macedonians’ to the smallest possible space — and that is the space between our two ears — all while keeping our mouths closed”.  He described the Prespa Agreement as a detrimental compromise, likening it to “a bitter fruit of a tree that has been poisoned a long time ago”.  Security Council resolutions 817 (1993) and 845 (1993) — which conditioned his country’s membership on the acceptance of a provisional reference and an obligation to discuss the name issue — violated the right to self‑determination.  Both the 1995 Interim Accord and the Prespa Agreement were adopted to justify this violation.

Stressing that Greece is acting as if it were not bound by the rules of international order, he said that, as per the Vienna Convention, the 1995 Interim Accord and the Prespa Agreement that stem from it are null and void because they violate the jus cogens standard of self-determination.  He underscored that this standard is established by Article 1, item 2 and Article 55 of the United Nations Charter.  “If the United Nations are incapable of giving force to a righteous law, then they will only legitimate unrighteous force,” he stated.

A referendum on the Prespa Agreement will take place in his country on 30 September, he said, thanking the foreign representatives who visited his country recently for their good intentions.  However, he called on them to unblock the European Union and NATO membership process without violating the right to self-determination.  Reminding his fellow citizens that voting on a referendum is a right, not an obligation, he warned that if the referendum succeeds a semi-sovereign State will be created.  If it fails, a possibility to “renew the national consensus that we achieved at the beginning of our independence” will arise.  He himself will not vote, he added.

Emphasizing that this irrational dispute has had detrimental consequences for his country and its citizens, he said that his country was denied the right to prosperity due to Greek blockades.  He called on all the States that have already recognized his country and established diplomatic relations under its constitutional name not to reverse their decision.  “Help us by being the guardians of our right to self-determination, thus safeguarding your right to self-determination,” he said, stressing that the United Nations can only be relevant if it respects its own principles.